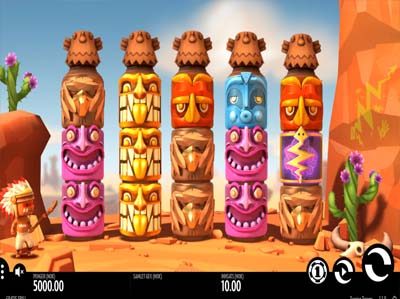 Turning Totems is a very unusual and visually rewarding slot game by software developer Thunderkick. First off, you won’t see the regular layout – the reels her are, in fact, 3D totem poles. Each of the symbols on the reels spins separately and not vertically, as is most often the case. Instead, they each spin horizontally, from left to right. The symbols each represent a unique face, carved into the surface of the totem pole. There are a total of 7 different faces you can encounter, and for each of distinction, they each have their own color. The colors are brown, blue, green, purple, orange, yellow and brown with gold. What’s best, you can also win two ways: from left to right and from right to left. The poles are placed in the middle of the desert, which complements the theme perfectly. There’s also a pretty sophisticated soundtrack to accompany gameplay.

Turning Totems has several attractive features in store for players. Such is, for example, the Thunder Reel feature. You will be looking to land the Thunder Snake symbol anywhere on the reels in order to activate it. As a result, it will turn all Sleeping Wilds on that reel into regular Wilds. If this doesn’t trigger the Bonus Game, you will then receive an automatic respin.

As for the Bonus Game, you will need to have at least three Thunder Reels at the same time to trigger it. If you meet this condition, you will gain a total of 5 freespins, whereas the Thunder Reels will still be there throughout the duration of the feature. So all in all, you are looking at 5 freespins with locked Wilds on 3 reels or more.

The Sleeping Wilds are actually the game’s lowest paying symbol and pay just as any regular symbol as long as they remain asleep. Once they become active, they change their appearance by opening up their eyes. Following this transformation, they become the highest value symbol on the reels. And what’s more, they can replace any of the other symbols to help create winning combinations. The only symbol they cannot substitute for is the Thunder Snake.

Turning Totems offers stunning graphics and a fairly entertaining gaming experience. Gameplay is rather simple and straightforward and the bonus system isn’t too complex. This is a medium variance slot game with potential payouts of up to 998 times your stake.