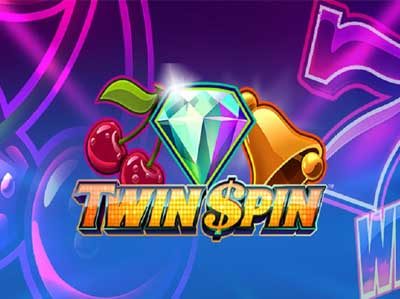 Twin Spin is an video slot by software developer Netent. It has a nice groovy vibe and a jazzy soundtrack to accompany gameplay. To begin with, let’s first say that, though all modern-looking and glossy, this is more of a classic slot game. It features a bunch of all your most typical slot machine symbols. But if you are hoping for a vintage slot machine experience, that is not going to happen here. Twin Spin boasts a number of exciting, contemporary features, so it’s not just the appearance that’s attractive. Speaking of which, the backdrop and reels give you the sensation that you’re at the dance floor. There are neon lights in the backdrop, and each of the reels is practically an LED screen, with lights running across them every now and then. And the graphics are all in all pretty high quality, too. 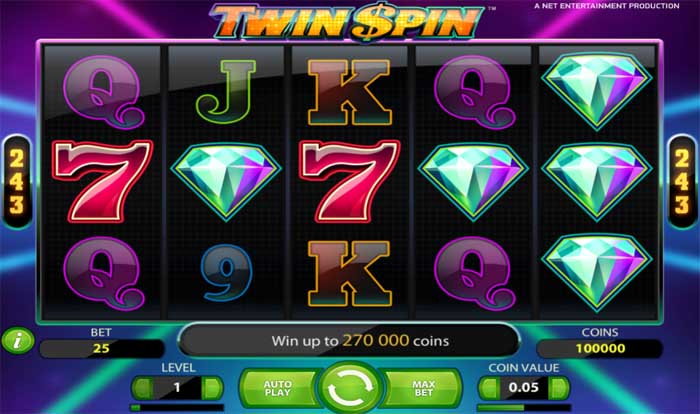 As for the symbols, there are two main types. First you have the lower card symbols that a very large portion of modern day slot games also have. These include the symbols A, K, Q, J, 10 and 9. They are hollow and have a neon lining, to fit in with the theme. And then we have the second group of symbols in Twin Spin that qualify as classic icons. You will be sure to recognize them instantly, if not from actually playing an old school fruit machine, then from multiple pop culture references for sure. These start with the cherry and golden bells symbols. Following them, we have the BAR and the red lucky 7. And finally the highest paying icon is the diamond, offering payouts of up to 1,000 coins. Notice also that the layout here is pretty modern, offering 5 reels and 3 rows. And on top of that, you can also benefit from a generous 243 ways to win. These are fixed, of course, so you can’t regulate them. But stakes are fairly liberal, spanning from 25p per round up to a total of £125 per round. The RTP is also very agreeable at about 96.7%.

Unusually for a classic slot game, Twin Spin features its very own Wild symbol. And unlike the rest of the icons here, this one doesn’t offer any payouts. However, just like them, you can expect it to land pretty much anywhere on the reels. And that can be of great use, because the Wild can replace any of the regular symbols here to help form winning combinations. As a result, this can boost your winnings quite noticeably. The Wild also happens to be the only special symbol on these reels, which means that there are no exceptions as to the symbols that it will be able to substitute for.

But that’s not to say that there are no other extras for players to enjoy in Twin Spin. In fact, it has a unique Twin Reel feature, which doesn’t even require a Scatter or Bonus symbol. And better yet, you can even take advantage of it at any point during the game. 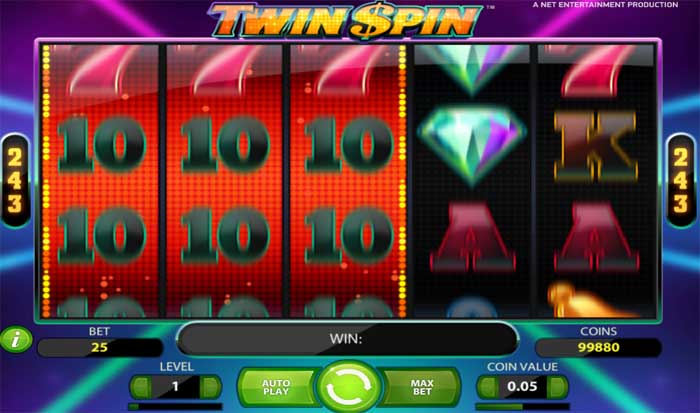 Basically, it starts with there being at least two adjacent symbols being chosen at random for each and every spin. The symbols are quite obviously on two different reels, and as a result these two reels become link for that spin. Over the course of the spin, they can actually extend to include three, four or even all five reels. Notice that these reels don’t necessarily need to be the leftmost reels. They can be anywhere on the screen, with the only condition being is that they are adjacent.

As a result, players can end up landing large quantities of the exact same symbol. And this, in turn, can grant you some pretty impressive winnings. As a matter of fact, every spin has the potential of delivering up to a whopping 1,080 times your total stake! However, this is the only special feature in this game. There are no freespins, no pick me games, no wheels of fortune or other such conventional bonus rounds. And frankly, it wouldn’t be right for them to be here, provided you can benefit from the Twin Reels all throughout gameplay. 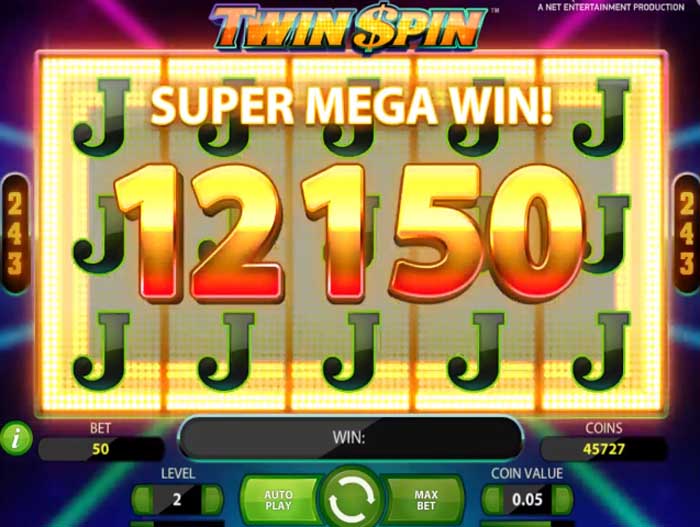 Twin Spin offers a really fresh and modern twist to the classic slot game. The theme is vibrant and dynamic, and the visuals are certainly also up to standard. Moreover, it has both a Wild and a special feature of its own, and typically for this developer, the latter sort of merges with the base game. On top of that, there’s also the high variance aspect to keep in mind. As we already mentioned, you can win pretty massively in this slot game. But you will need to be patient to land those huge prizes, so be sure to watch out for your bankroll.