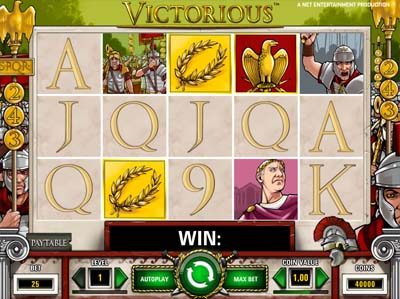 Taking you back to the times of Ancient Rome, the Victorious slot game from Netent will drop you right into the heat of the battle. As such, you’ll be presented with the sound of war horns every time you form a winning combination on the reels, while the imagery of soldiers on the march can be seen in the background. The symbols included on the reels start with the addition of the A, J, K, Q, 10 and 9 icons. Not only that, but there are four other character symbols as well, which begin with an image of marching soldiers, another of a warrior in mid-combat, a third of the army’s general, and the final one of a governing ruler.

The game itself is offered up on a layout of five reels and three rows, and Netent have also included a total of 243 different ways to win. This cannot be customised in any way, but you do have the chance to change around your bet placed per spin. This is done first of all by adjusting the coin value between £0.01 and £0.50. Furthermore, you can switch the bet level between one and 10, and if you push both of these to their highest levels, you’ll be placing a maximum overall wager of £125 per round.

There’s a couple of special additions to the game, which begins with the wild icon. This is in the shape of a golden eagle, and as a wild icon, it will stand in for any other symbol on the reels in order to form a winning combination.

In addition to this, you’ll find that the laurel wreath icon acts as the free spin symbol. You’ll need to ensure that three or more of these show up on the reels in succession in order for their special feature to be triggered. This is the freespins round, and three of these provide you with 15 freespins. Four freespin icons offer you 20 freespins, while five of them will give you 25 freespins. Any wins formed during this round will see the pay out you receive be tripled.

We always feel victory is in the air when playing Victorious, so it’s one we frequently return to in order to boost our feelings of good fortune. It’s very graphically pleasing, features wonderful special additions, and also includes high quality graphics and animations.