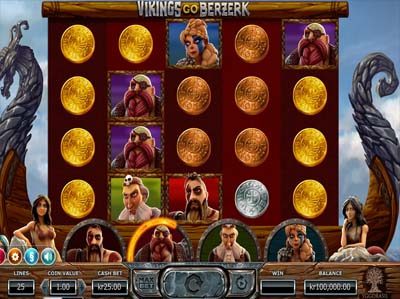 Delve into battle with Yggdrasil’s new slot Vikings go Berzerk. This developer has decided to stay true to the Nordic origin of its name and has come up with yet another Viking-themed slot. What’s more, it is actually based on another Yggdrasil game called Vikings go Wild. What sets it aside from its predecessor is the addition of new features – we’ll get into those in a bit.

The game has a total of 5 reels, 4 rows and 25 paylines. Betting amounts per spin range from £0.25 to £125. This slot features four main characters, all brutal-looking Vikings, including a female warrior.

There are a number of special features here that can make for some promising wins and are simply just entertaining to watch. First up is a random feature called the Treasure Chest. A treasure chest icon will appear on reel 4 and a Golden treasure chest will land on reel 5. Each will activate the feature, allowing you to choose from 5 prize boxes. The regular chest will provide cash prizes of up to 1000 coins and 7 to 21 frespins. The Golden one, on the other hand, will also grant you 7-21 freespins and up to 10000 coins. 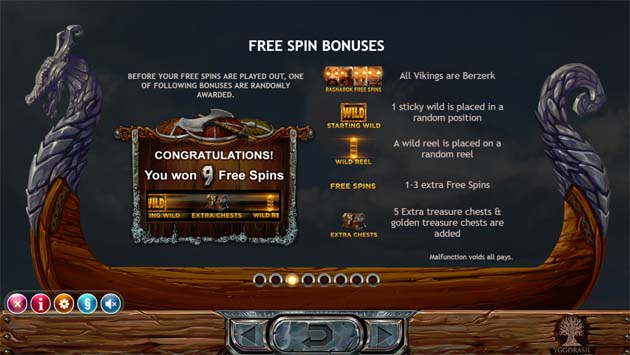 There’s a separate freespins feature, though. You can activate it by landing 3, 4or 5 Scatters, which will award you 7, 14 or 21 freespins respectively. During the freespins feature, a Siren will attack your Vikings. If the particular Viking manages to fend off the monster, he or she will become a Sticky Wild.

But wait, because there is yet another freespins feature for you! It goes by the name of Ragnarok Freespins and you can activate it by landing a Golden treasure chest or landing a lucky frespin pick. As a result, every Viking on the reels will become a Sticky Wild for as long as the feature lasts.

Finally, you will see the 4 main characters just below the reels, as well. Each time you spin a winning combo with one of the Vikings, you will see them start accumulating rage, setting their rage meters off. Once the meter reaches its maximum, you will receive 7 freespins. And then that Viking will enter Berzerk Mode, which means it will always beat the Siren during the freespins feature. And in doing so, it will become a Wild symbol. 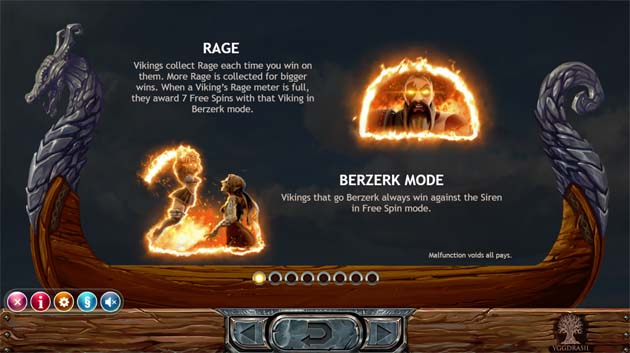 We usually really like Yggdrasil slots, and Vikings go Berzerk makes no exception in delivering great graphics and gameplay. However, as much as we like it, we really weren’t happy with the Rage feature. We got the impression that too much of the RTP is tied up in it. Furthermore, the rage meters take forever to fill up and this makes players play much longer than intended in pursuit of this bonus feature.