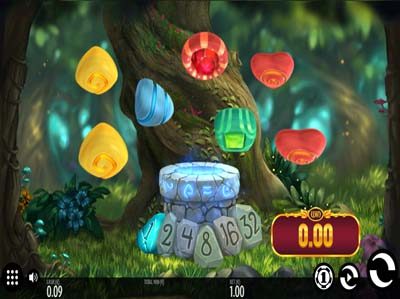 Well of Wonders is a fascinating new slot game by developer Thunderkick. We have seen some pretty awesomely designed slots by Thunderkick before, but it looks like this provider’s just competing with itself, trying to keep on surprising players with captivating new themes and graphics. The game brings you to an enchanted forest, with a magical well in the middle of it. Glowing runes line its opening and each time you spin the reels, it tosses out different colorful stones. The soundtrack contributes to the whole magical theme perfectly. And what’s remarkable about this game is that there are no actual reels or paylines in the traditional sense. Instead, there are 7 symbols, each representing its own reel and its own payline at the same time. There are 10 different symbols in total and winning combinations form by landing 3 of a kind during a spin. The red gemstone symbol is the one you will really want to look out for, as it offers the highest payouts.

As we already mentioned, don’t expect to see a traditional grid. The symbols will simply be floating around in thin air, as they emerge from the magical well. Bets here can start off with as little as 10p per spin and reach up to £100 per spin. As for the RTP, it’s estimated to be set at 96.1%.

Special Features in Well of Wonders

Such a magical and wondrous slot game has equally magical and wondrous special features in store for its players. First off, let’s get the Wild symbol out of the way. It has a glowing ‘W’ on it, so you won’t miss it. As any Wild does, this one can replace any of the other symbols without exception to create winning sequences.

Another pleasant treat this slot game has to offer is its Respin feature. It will see to it that the symbols of any winning combinations disappear during a spin, making way for new ones to take their place. That way you can gain multiple wins during the same spin. Furthermore, every time you trigger a respin, you will double the multiplier. The maximum that multiplier can reach, however, is 32x.

In addition, Well of Wonders also has a nifty random feature called the Fairy Feature. It can take place at any point in the game, during any spin. The feature manifests in the fairy coming onto the screen. She will only become active, however, if you have landed a non-winning spin. As a result, she will remove all the singular symbols (meaning, of which there is only one on the screen), after which you will receive a respin and an increased multiplier. And don’t take that for granted, mind you. This slot game can offer you winning opportunities of up to 2,280 times your stake on any spin!

Well of Wonders is a graphical masterpiece, there’s no doubt about it. Thunderkick has really managed to create a new kind of gaming experience. And what certainly doesn’t hurt is the winning possibilities are just as magical as the theme.