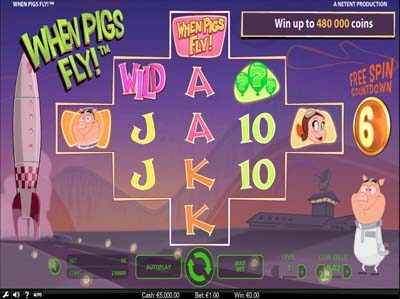 When Pigs Fly! from Netent offers up a totally warped and zany game, taking you to a planet where pigs apparently rule. You will be presented with a backdrop of a rocket waiting to blast off, as well as a space station. The reels of the game feature icons of the regularly appearing A, J, K, Q and 10 symbols, and these are joined by six other, more thematically relevant symbols. This starts with a helmet with wings on it, balloons stamped with the number 7 and a rocket with the BAR word on it. There’s also a sow aviator and a male pig astronaut, which are joined by the game’s logo.

The game is presented on five reels, but the rows are stunted in a 1x3x5x3x1 design. Netent have also included a total of 3125 different ways to win, and while this is not something that you’re able to adjust, you have the option of altering your wager placed per round. This can be done by changing the single coin value between £0.01 and £0.20. Meanwhile, you can also alter the amount of coins in play between one and 10, meaning that you’re able to place a maximum total wager of £100 per spin.

When it comes to the time for you to play, you’ll find that there are some very intriguing special feature included in it alongside. This begins with the wild symbol, and this will only appear on reels two, three, four and five in the main game and freespins. As a wild, it stands in for all other icons on the reels in order to form a win.

Further to this, any winning combination formed will set the reels of on re-spins, and each of these re-spins increase the size of the layout. You’ll get up to five of these coming into play, with the countdown of freespins showing at the right hand side of the screen. Once you form a winning combination after the fifth re-spin, you’ll receive a total of eight freespins, which are played on the full five reel and five row layout.