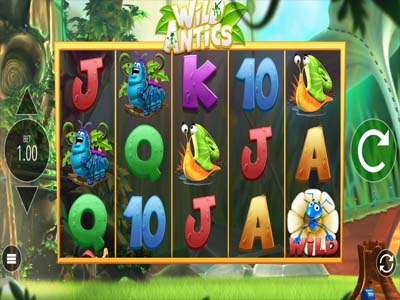 Wild Antics is an amazingly fun and entertaining slot game by slot developer Blueprint Gaming. Its striking visuals will offer a delicious treat for fans of rich, 3D graphics that can tell a story of their own. If you have seen Pixar’s hit animated movie A Bug’s Life, you will notice the uncanny resemblance that this slot bears to the 1998 film. The design here is very detailed and of very high quality, depicting the complex life of insects. Aside from the lower value playing card symbols from Ace to 10, the reels also feature a number of charming bugs. First up is the quirky snail and overjoyed ladybug. Following them is another very happy character – a blue caterpillar. The Bonus and Wild symbols all show different ants, but we’ll look into that in just a bit.

The layout of Wild Antics features 5 reels and 3 rows, with 20 active paylines. While you cannot regulate the number of paylines, control over the stake amounts is at your disposal. Possible amounts range from 20p per spin up to £500 per spin with an RTP of 95.51%.

Wild Antics actually comes with a variety of special features, so it’s not just the visuals that are here to entertain. The highest paying symbol on the reels is the Wild, which can substitute for any of the regular symbols. It cannot replace any of the 5 different bonus symbols, however. 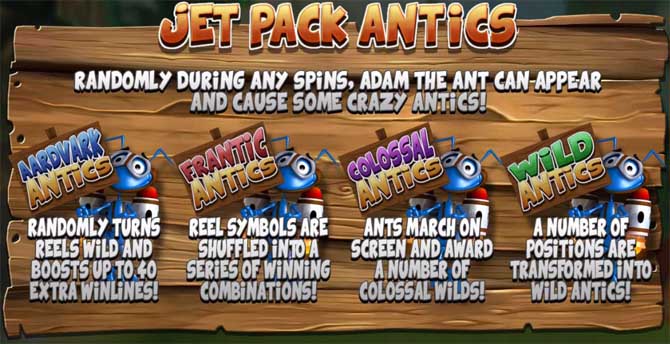 This slot also has a Jet Pack Antics random feature, starring Adam the ant. He can come onto the reels at any point during the game and bring upon one of four different features. The Aardvarc Antics feature can turn reels fully Wild and boost the number of paylines up to 40. Frantic Antics, on the other hand, can shuffle the symbols on the reels to assemble them into winning combos. The third feature is the Colossal Antics and will result in ants marching onto the reels and awarding you colossal Wilds. Finally, there’s the Wild Antics feature. This will transform several random positions on the reels into Wild Antics. 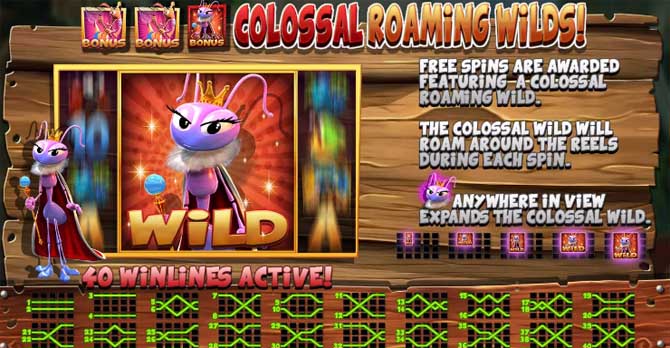 The second major bonus game here also has 4 different features. In order to activate it, you will need to land the Aardvark Bonus symbol on reels one and three in combination with one of the bonus characters on reel 5. This is a freespins bonus round that can offer different extras. For example, the Worker Ant Roaming Wilds will award you freespins with ‘roaming’ Wilds. This means any Wilds that appear on the reels will remain in place and just randomly move across the screen. Alternatively, you get freespins with Multiplying Roaming Wilds, which pretty much speaks for itself. The other two features are the Expanding and the Colossal Roaming Wild features.

When it comes to new and innovative bonus features, Blueprint Gaming are really in the forefront, and Wild Antics is no exception. This slot is heaps of fun and excitement. The diverse bonus games greatly contribute to this game’s overall appeal, as do the superb graphics. There are a lot going on, so it can probably be a bit confusing to play this slot machine the first few times, but when you get the hang of all the different bonus features in the game, you start to really enjoy it. If you are into the more advanced types of video slots with several different bonus features, you are going to love this one from Blueprint Gaming.