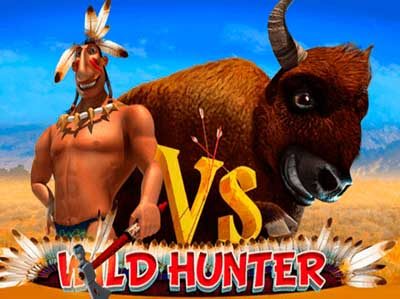 Wild Hunter is a Native American themed slot game by Playson. The graphics here have a very modern, 3D feel to them and look as though they’ve come directly from an animated film. And, to be honest, they do appear rather goofy, too. There’s a main character here, who will be keeping you company as you spin the reels. He will be standing tall, right by the reels, holding his tomahawk and occasionally tossing it around. The backdrop offers a very beautiful view and a breathtakingly realistic depiction of the sky. The soundtrack is also nice, featuring some ethnic vocals and drums. As for the symbols, they picture 5 different lower value playing card symbols. Other than that you will also see icons with an eagle, a teepee, drum and the buffalo character, walking on his hind legs. 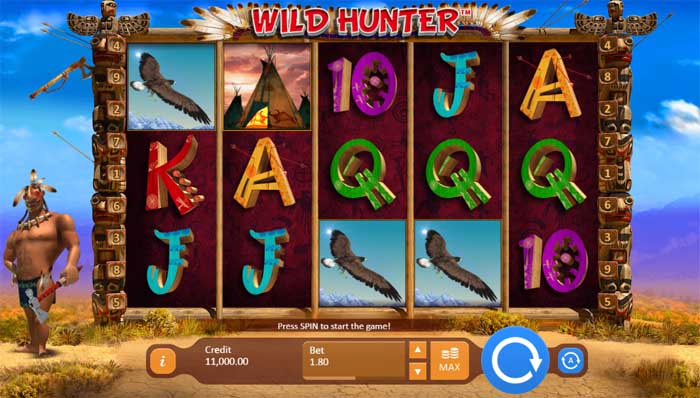 As far as the layout goes, it’s pretty common and has 5 reels and 3 rows. There are, however, only 9 paylines in Wild Hunter, on top of which you won’t be able to adjust them. But, at least the betting amounts correspond to the number of paylines. You will be able to stake anything from 9p per spin up to £45 per spin. Keep in mind, though, that the RTP is by far not the highest at only 94.15%.

The two leading characters in Wild Hunter are the Hunter symbol himself and his Buffalo rival, who keeps teasing him all the time from the opposite end of the reels. The former acts as the Wild symbol and is also the most lucrative symbol on these reels. Furthermore, he can appear in any position and replace the other symbols on the screen. There are, however, 3 symbols, which it cannot replace: the Totem, the Tomahawk and Buffalo symbols.

Now, the latter two are the ones you will really want to look out for. The Tomahawk symbol can only appear on reel 1, whereas the Buffalo symbol can only land on the 5th reel. If you see them on the screen simultaneously, they will trigger the freespins bonus round. This means that you will receive 10 freespins with further extras. For one, the Tomahawk will become a Wild for the duration of the feature. It will be able to replace any symbol, except for those mentioned above.

In addition, whenever the Tomahawk lands adjacent to the Eagle symbol, it will activate a random multiplier from 2x to 50x. Furthermore, as the Hunter will be chasing the Buffalo across the reels, you will notice him sometimes throw the Tomahawk. It will then fly across and either reach the end, or stop at a skull symbol.

Wild Hunter is certainly a very entertaining slot game that features a fun little story in itself and amusing characters. However, it is also highly volatile, meaning it can potentially offer some pretty handsome rewards. But with that in mind, smart bankroll management would be wise.