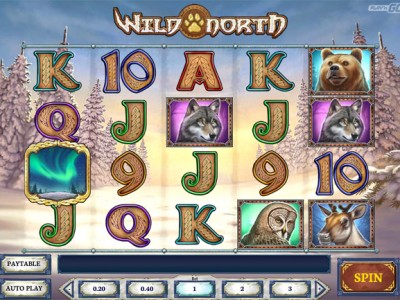 If you enjoy the great outdoors, and enjoy it moreso in the snow-covered north, then this is a game for you. Wild North is an artistically animated game, featuring reels filled with various animals, including grizzly bears, owls, wolves and reindeer. Backed by an atmospheric soundtrack, Wild North offers up an altogether iridescent-like, visually appealing game.

There’s a total of five reels included, and four separate rows. Play’n Go has also incorporated 40 paylines into the game, and players can choose to wager between £0.20 and 50 coins per spin. Each winning combination will beautifully animate the symbols on the reels, providing a thrilling experience along the way.

The game includes a wild symbol, represented by the lynx. This will substitute for all other symbols on the reels to create a winning combination, except for scatter symbols.

And speaking of scatters, the Aurora Borealis acts as this, and three of these appearing anywhere on the reels will trigger the Northern Lights Bonus Game. This allows you to win one of seven exciting bonus features, which you can find by spinning the feature wheel.

Of the features that you can win, the first is The Great Wilderness. This gives you three freespins, and includes 4×4 mega symbols appearing on reels two to five. There’s also the Wild Lynx, which will provide three freespins, and one or two reels go entirely wild. There’s also the Running Reindeer, giving you a single freespin, which provides the reindeer symbol stacked on reels two to four. The Savage Bear also gives one freespin with a random multiplier of up to 30 times awarded before the freespin.

Then, there’s the Wolf Pack, providing a single freespin with a large 2×2 wolf that sticks on the reels. Eyes of the Owl offers a single freespin, with two large 2×2 owl symbols appearing and sticking on the reels. Finally, the Wild North Explorer provides you 20 tiles on the screen. Simply select a tile to reveal a hidden prize. Cash prizes and bonus features can be won.

Wild North provides you with a great game, filled with extra benefits and an intriguing soundtrack.