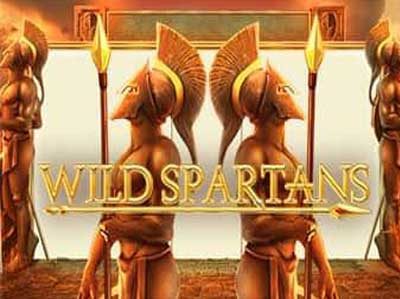 Wild Spartans is a historic themed online slot game by casino software and slots developer Red Tiger Gaming. Typically for this developer, the graphics and design are high end and there’s also a very dramatic soundtrack to further enhance the theme. There are two Spartan warrior statues standing guard on either side of the reels, who occasionally come to life. Another interesting feature is that the color of the sky changes color throughout the game, painting everything from grey to gold, to blood-red. And as for the symbol in Wild Spartans, they feature the lower value playing cards A, K, Q, J and 10. In addition to them, there are some warrior accessories, such as the sword and the spear. Then, finally, there’s a gold helmet as well. 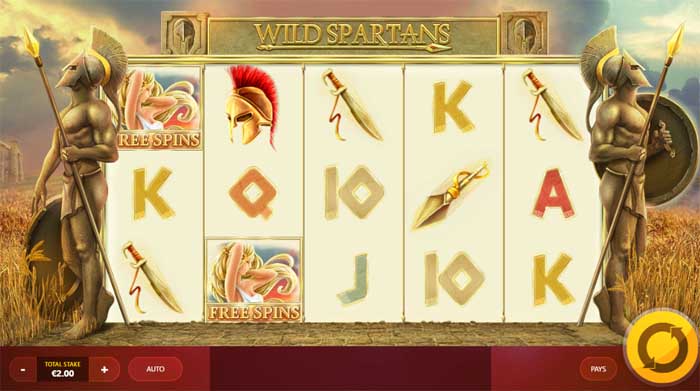 The layout in this slot game is pretty traditional and features 5 reels with 3 rows. There are 10 paylines here in total, and as is the norm with games by this developer, you won’t be able to regulate their number. You can, however, play around with the betting range, which here is a little less generous than in most Red Tiger slots. You can wager anything from 20p per spin up to the maximum of £500 per single spin. In addition, the RTP in Wild Spartans is fairly high at 96.43%.

The gold and red round shield icon acts as the Wild symbol in this slot game. Whenever it lands, you will see a warrior come out from behind it and then hide again. The Wild can replace any of the other symbols to help create winning combos. It’s also the most lucrative one here, offering payouts of up to 500 coins. 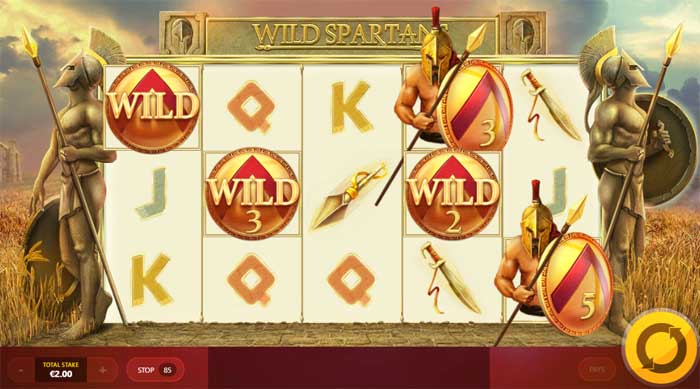 The Wild can also remain locked for a random number of spins, whenever it lands on the reels. An animated character will determine how long that will be. But in some cases, the Titans statues will come to life to give you a boost and increase that number of spins. This feature has great potential, imagine getting a wild line and then having the Titans come to life and give you five extra spins. That scenario is quite unlikely, but the feature activates quite often, giving you better winning opportunities.

The one symbol that the Wild cannot substitute for is the game’s Scatter, which comes it the shape of a young girl. The Scatter will be responsible for activating the freespins bonus feature. And like the Wild, it can also land anywhere on the reels. However, you will need for it to land 3 times during the same spin. You will then receive a random number of freespins. The titans on either side of the reels will stomp their spears against the ground. The number of times they do that will determine the number of freespins you will receive. 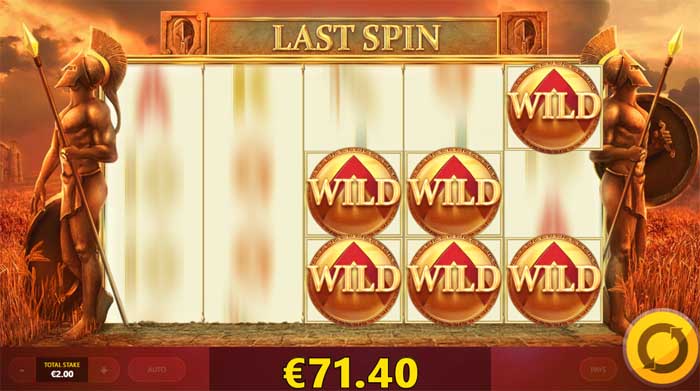 Furthermore, throughout the duration of the freespins feature, every Wild that you land will remain locked on the reels, also known as a sticky wilds feature. This way you will automatically increase your chances of landing winning combos. The dream is ofcourse to create a wild line early on, for a really big win.

Wild Spartans is genuinely a treat to look at. The animated features have a very classy feel and add to the overall entertainment. And though the freespins feature may not be very easy to trigger, it can be massively rewarding with the sticky wilds feature. Slots with sticky wilds are highly popular, with titles like Dead or Alive and Cazino Zeppelin being sticky wilds classics. Wild Spartans are also capable of producing some really big wins, so if you like high variance slots, you will love Wild Spartans from Red Tiger Gaming.