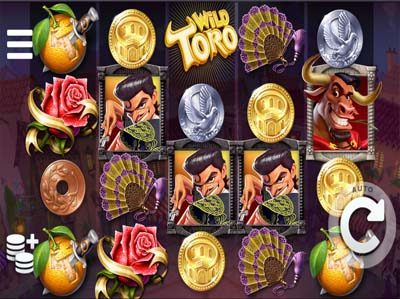 Wild Toro from the creators at Elk Studios performs as well as you’d expect from a slot named in two different languages – fair to middling. Still, the graphics are interesting, the soundtrack is objectively lovable, and the theme is fairly interesting, albeit somewhat too socially involved (animal rights activists might give it a go, seeing that the two main icons are an evil sneering matador and a butch bull that rams him, if you’ll pardon the pun).

Let’s speak technicalities for a while – Wild Toro is a 5-reel slot, with 4 rows and impressive 178 one-way paylines. The jackpot is not progressive, but it’s still substantial – 225,000 coins. Given that the coin value varies from 20p to £100, this translates into a potentially life-changing sum.

It’s worth noting that the game is playable on a variety of devices –desktops, mobile phones, tablets, etc. There’s no additional software involved, and you can play it both in trial version, and for real cash. 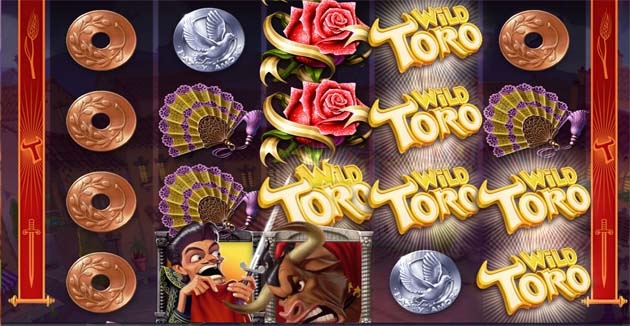 As per usual, the symbols start to pay off once you land three or more of any on an active payline, which should be fairly easy, given that there are 178 of them. Of course, you max out with five of any, which, according to the paytable, may be worth (in ascending order): bronze coins, 50x your stake; silver coins, 60x your bet; gold coins, 80x the stake; fans, 200x the stake; oranges with daggers, 500x your bet, and, last but far from the least, roses, 1,000x the stake.

Other symbols include the wild, which is Wild Toro’s logo in blocky yellow letters, the matador and the toro (bull). Of the three, the first is what you’d expect from a classic wild – it substitutes any other symbol, save the toro and matador, but not much else. The toro (the bull symbol, not the basic wild) acts as a walking wild, moving to the left, whereby it generates one re-spin with each step. The matador will act as a blocker provided there are no toros around, and also fills the role of the scatter.

There’s a bonus feature triggered if you land three matadors anywhere on the reels – Toro Goes Wild. It can potentially have a high payout, but it’s also fairly hard to activate it, so it sort of evens out. In this mode, the Bonus mode, you get three re-spins, wherein the matador symbol act as sticky fly paper and catch more matadors. Each additional matador adds one re-spin, and the round ends when either of two things happen – the re-spin counter reaches zero, or the tor appears.

If the latter happens, the toro will attack the matadors one by one and knock them off the screen. To do this, the toro will move horizontally and vertically, leaving a trail of wilds behind, until all the matadors are out of commission. This can be a great feature if you are lucky.

The major gripe most punters will have with Wild Toro is that there are no freespins per se, and the bonus game is just a creatively executed bonus round, not a game per se. Still, it’s quite fun, the max potential payout is huge, and the bonus features are actually interesting once you set your expectations to the right level.