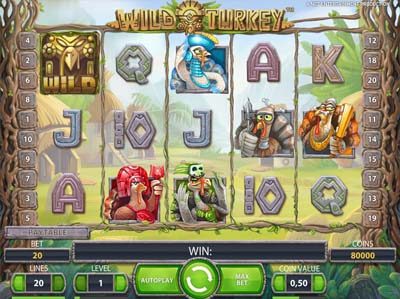 We’re not quite sure how Netent came up with the idea for an online video slot based on tribal turkey groups, but they managed to form a wonderful product around it. The game is set against a backdrop of straw-roofed huts, probably providing the turkey’s with their homes. As far as the icons on the reels are concerned, these begin with the regularly seen A, J, K, Q and 10 icons, which have been designed to resemble stone. Five members of the turkey tribe act as the other symbols in the game, with a couple of warrior birds, female rulers and what could be considered a wizard turkey.

The game is presented on a five reel and three row interface, and Netent have also added a total of 20 different bet lines alongside. These can also be customised to suit your own personal preferences by adjusting the ‘Lines’ box or by clicking on a number down either side of the reels. Following on from this, you can also change the amount of the wager you place per spin, and this is done firstly by changing the bet level between one and 10. Following on from this, you can change around the value of a single coin between £0.01 and £0.50, and this will allow a maximum overall wager of £100 to be played per round.

There’s a wild symbol included in the game as its first special addition. This is represented by the stone column, and these can only appear in the main game, but will stand in for all other symbols in order to form a winning combination. Three or more wild symbols showing up on the reels will present you with the freespins round, with three wilds providing 15 freespins, four giving you 30 freespins, and five offering up a total of 60 freespins.

The freespins round has an extra perk to it though, and this is the stacked wild. These can only appear within this round, and act in the same way as the regular wild, but, of course, are stacked taller. Should this cover any of the reels during the round, you will activate two additional freespins on top.

On the whole, we enjoy playing this video slot. It’s a great theme that only Netent are able to make work in a fully entertaining way.