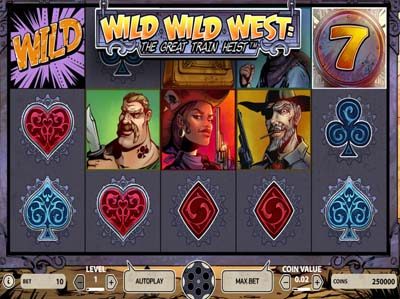 Wild Wild West is an exciting slot game brought to us by renowned slot game developer Netent. This game will take you over to the early days of the New World in a very unique, comic book-like representation. It offers a very catchy spaghetti western tune to add just the right amount of authenticity. You will notice that the spin button is actually the barrel of a revolver, which is also a great touch to the overall design. There aren’t all too many symbols here, though. There are only four lower value symbols, picturing the playing card suits. And there are also only 4 higher value character symbols, the highest paying of whom is the female robber.

The layout of Wild Wild West is the rather customary 5 reels by 3 rows. You will find that there are only 10 fixed paylines in this slot game. Stake amounts span from as little as 10p per spin and all the way up to £100 per spin. In addition, you can also enjoy a good RTP of about 96.7%.

There’s plenty to benefit from in Wild Wild West, aside from the striking visuals and compelling atmosphere. For example, despite the somewhat scarce number of regular symbols, there’s actually a whole bunch of special ones. First up, there’s the regular Wild symbol, which can substitute for any of the other symbols to contribute to winning combos. It cannot replace the Scatter symbol, however.

The Scatter will be the one you really want to look out for. By landing three or more of it during a spin, you can trigger the freespins feature. As a result, depending on the exact number of Scatters that you landed, you can receive 10, 20 or up to 30 freespins. And that’s where the real fun begins.

During the freespins feature, you can land not one, but 4 different types of Wild symbols! Actually, one of them will be chosen at random before the feature begins. You can have the regular Wild, as described above. Or you can benefit from an Expanding, a x2 Multiplier or a Spreading Wild. What’s more, an overlay Wild symbol will appear during each freespin, covering reels 1, 2 and 3. And finally, you can also retrigger this feature and gain a maximum of up to 60 freespins. 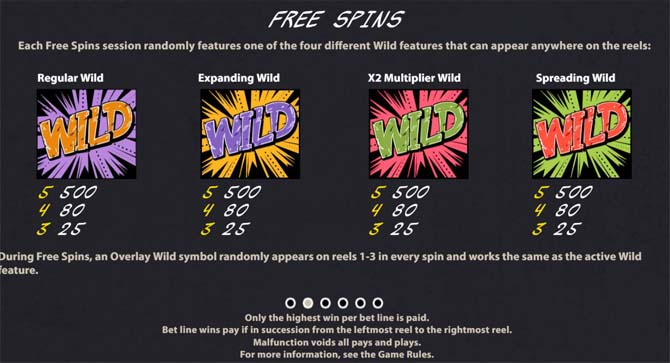 But we’re not quite done here yet. This slot game also features yet another bonus game. In order to trigger it, keep an eye out for three Safe Bonus symbols on reels 1, 3 and 5. This will activate the Pick and Click feature, which will offer you to click on one of the Bonus symbols. This will, in turn, award you a cash prize of anywhere between 5 and 50 times your total stake.

Wild Wild West surely is a one of a kind slot game. Yes, we’ve seen other slots of the same theme, but nothing quite as a sophisticated. It’s a perfect mix of entertainment and solid winning opportunities, with prizes reaching up to 500x your stake. We don’t think it is as good as NetEnt’s other western themed slot “Dead or Alive”, but it has some cool features and a more modern design than its predecessor. The RTP of almost 97% is very good compared to other slots from other software providers. All things combined, Wild Wild West is another well made slot machine from NetEnt and worthy of 4 out of 5 stars in our opinion.