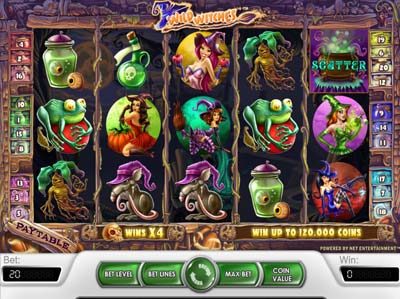 Wild Witches is not so much about the spooky and scary kind of witch that you may recall from horror or fantasy films. Instead, this game from Netent presents the witch as a more sexy and tempting character, sort of like the ones featured in the television show ‘Charmed’. As such, you’ll find that the icons on the reels are more in line with this idea. Therefore, you’ll be able to spin through five lower paying icons, such as the eyeball in a glass jar, a toxic potion, a rat in a hat, a devious looking plant root and a bugged out frog. This is joined by six different witch characters going through their every day routines, such as casting spells, flying on broomsticks, or sitting around on pumpkins.

Alongside this, you’ll find that the game has a total of five reels and three rows, which are joined by the inclusion of 20 different pay lines. Players do have the chance to adjust these if they so choose to, and this is done by using the ‘Bet Lines’ button, or by clicking on one of the numbers down either side of the reels. Furthermore, you can change around the bet you place per round, and this is done first of all by altering the value of a single coin between £0.01 and £1 per line. The bet level can also be changed between one and four, and this will allow a maximum overall wager of £80 to be placed.

The wild symbol in this game is one of its first special features, and this is represented by the spell book with a skull ink pot and quill next to it. This will substitute for any other symbol on the reels in order to form a winning combination, with the only exception being scatter icons. Wins including this icon provide a double pay out as well.

There’s also the addition of a golden wild, which can only appear on the third reel of the game. This acts in the same way as the standard wild icon, but if it shows up and creates part of a winning combination, it will pay out a win amount that is quadrupled.

Finally, the game’s scatter symbol is represented by the bubbling cauldron. These pay out wherever they show up on the reels, and if you spin three or more of these into view, you’ll trigger the game’s freespins round. Three scatters offer up 10 freespins, four will provide you with 20 freespins and five will give you 30 freespins. All wins are tripled during this round.

Wild Witches offers up a very nice game addition to the Netent catalogue. It’s a nice theme in general, and there’s some quality gameplay included as well.