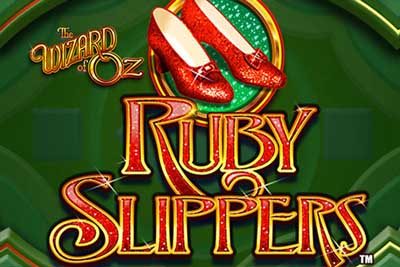 Wizard of Oz Ruby Slippers is an online slot game by software manufacturer WMS. It centers on the popular novel and the classic 1930s film after it. In fact, it focuses to a greater degree exactly on the film, as you will be seeing all your favorite characters exactly as they were portrayed there. You have Dorothy, the Scarecrow, Tinman and the Lion, among others. We can’t say the graphics are of outstanding quality, though. They are decent, you can certainly recognize the characters, but we have certainly also seen more finesse from this developer. The backdrop features a rather ambiguous cluster of greens, including what appear to be the buildings of the Emerald city. In addition to those, there are plants, such as trees and bushes, also visible. And the slot features a rather decent soundtrack playing in the background. 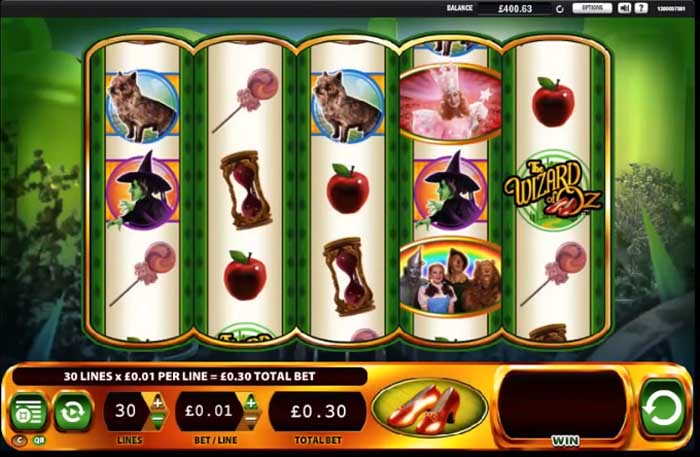 As for the symbols here, the lower value icons include images you will likely recognize immediately if you’ve ever seen the movie. These symbols start off with the hourglass and giant lollipop. Moving on with a very slight increase in value, there’s Dorothy’s basket and a red apple. This brings us over to the mid and higher value symbols. And the first of them is none other than the Wicked Witch, followed closely by Toto. Next is Glinda – the good witch and last but not least is the highest paying of the regular symbols depicting Dorothy and her friends. The layout in Wizard of Oz Ruby Slippers is pretty traditional, featuring a 5 reel by 3 row grid. There are 30 paylines available here in total, but these are adjustable. So if you feel like playing with a lesser number, you can regulate it with the buttons below the reels. With this in mind, the betting amounts range from only 1p per spin and up to a total of £60 per single spin. And the average RTP players can count on here is about 95.96%.

The game’s logo symbol happens to also act as its Wild. And in addition to that, it’s also the second highest paying symbol on these reels, after only the Jackpot symbol here. In fact, with its help you can win up to 1,000 times your line bet. And as is custom with Wild symbols, the one here will be able to replace all other regular symbols on the screen. When doing so, the Wild will be able to help create winning combinations and better opportunities to pocket prizes. In addition to that, however, the Wild will not be able to replace the game’s Scatter symbol. 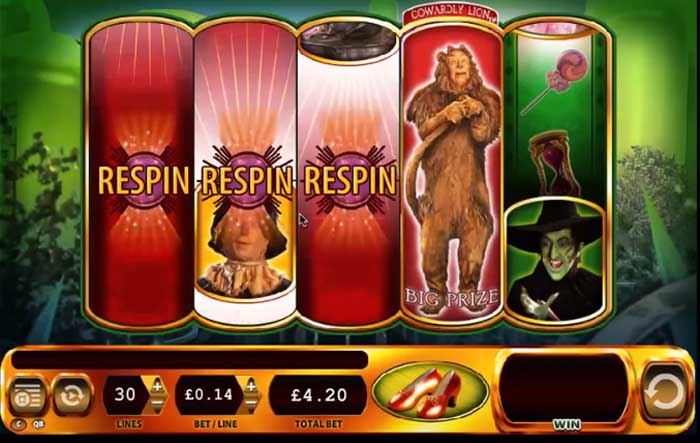 The Scatter, in turn, comes in the form of the Wizard of Oz himself, and can appear only on reel 5. More importantly, though, the Scatter will also be able to trigger this title’s freespins bonus feature. And in order for that to happen, you will need to land in combination with two or more feature triggering symbols at the same time during a spin. It doesn’t matter if they land on a payline or not. The different triggering symbols will trigger a different feature. Thus, Dorothy will give you a total of 10 freespins, and Scarecrow will award you 5 freespins and extra Wilds. Tinman will give you 5 freespins and a 3x multiplier on your winnings and the Cowardly Lion will give you a full Wild reel for each of the 5 freespins. Note also that you can retrigger the freespins round.

Landing any of these feature symbols in combination with the Crystal Ball icon on reel 5 will award you a random cash prize. It can be anything from only 4 times your total stake up to a total of 200 times your total bet amount. Then there’s also the Find the Broom feature to consider. You can trigger it again by landing 2 or more feature symbols, only this time in combination with the Wicked Witch icon on reel 5. This will bring you to a new screen with a pick me game. Revealing the symbol that helped trigger the feature from the base game will always prove more rewarding. But all in all, from this bonus feature you can gain different cash prizes. The most you can gain at a time is 50 times your total stake.

Wizard of Oz Ruby Slippers is certainly a very fun title. Sure, the theme can get you nostalgic and fans will love it, but it’s also much more than that. Yes, we did point out that the graphics aren’t WMS’ finest. However, this title is feature-packed and has a lot to offer in terms of gameplay. As you have seen above, it three main bonus features, but aside from that you can get a swing at the jackpot. And on top of that there are also a couple of random features to enjoy, too. The variance here is medium to high, so decent sized wins can come in at relatively balanced intervals. And of course, the freespins and pick-me rounds can be the most rewarding.