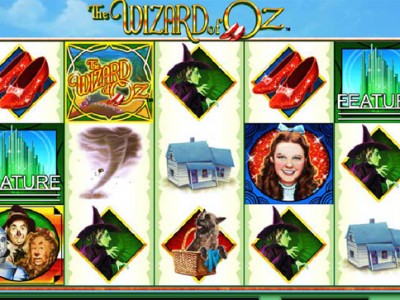 The Wizard of Oz is one of the most famous pieces of pop culture to exist in written and visual form. So, it would only be a matter of time before a game developer took it on board as a potential slot. Of course, WMS created The Wizard of Oz slot game, featuring imagery from the film, such as the red shoes, the wicked witch of the west, Toto, and Dorothy herself. In addition, Dorothy’s house and the tornado that transports everyone to Oz are also included as icons.

The game includes fives reels and three rows of a layout, with 30 customisable paylines also incorporated alongside. The bet that can be placed per payline begins from £0.01 and reaches the maximum of £5.00, which allows all players to place a maximum overall wager of £150 every spin. There’s also an autoplay feature included for those who don’t wish to constantly press the spin button.

The game’s logo acts as the wild symbol in this one, and this stands in for all other symbols on the reels to make a winning combination, except for jackpot and feature icons.

At random points during the main game, Glinda, the Good Witch can appear and change between one and five of the reels into expanding wilds.

The emerald city icon acts as the feature symbol, and is a scatter icon. Three of these appearing on reels one, three and five trigger the Oz Pick Feature. Here, you need to select a feature, which can award either a monetary amount, the Road to Emerald City Feature, or the Winged Monkey Feature.

The Winged Monkey Feature awards players with eight freespins, during which, the Winged Monkey Wild Feature can be triggered by the symbol for which landing on reel three. This causes winged monkeys to enter the screen and randomly change some of the symbols into wilds.

Finally, the Road to Emerald City Feature requires you to locate the Cowardly Lion, the Tin Man and the Scarecrow before heading to the Emerald City.

Every feature of The Wizard of Oz film has been crammed into this game, providing a product that will keep you entertained for days on end.