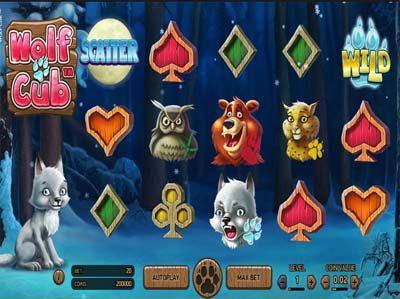 Wolf Cub is a cute and fluffy (not literally) slot game by renowned software manufacturer Netent. The graphics here and the general atmosphere are great and even if you’re not that much of an animal lover, you might become one after playing this game. Obviously, it centers on the main character of a wolf cub, who will be sitting right beside the reels as you spin them. The backdrop features a snowy night forest, with snowflakes peacefully falling down from the sky. You can tell it’s pretty cold out there, as the little wolf cub frequently stops to puff gusts of steam in between howling at the full moon. As for the symbols, you will be seeing other equally cute animal representations, such as bears, moose and bob cats.

The setup in Wolf Cub is fairly common, with 5 reels and 3 rows. There are 20 paylines in total, those, however, are not subject to adjustment. This will leave you with a relatively flexible total stake of between 20p per spin and £200 per spin. The RTP here is also at the satisfactory mark of about 96.34%.

The most valuable symbol on these reels is that picturing the ice wolf paw. It is the game’s Wild symbol and can offer payouts of up to 100 times your total stake. In addition, it can appear in any position on the reels and replace all regular symbols to help create winning combos. Naturally, though, it does not replace the game’s Scatter symbol.

It, in turn, comes in the form of a bright full moon and is responsible for triggering the bonus feature. In order for you to activate it, you will be looking to land at least 3 of it during a spin. Just like the Wild, the Scatter can also appear in any position on the reels. As a result, you will see the reels that have Scatters on them start to spin. When they stop spinning, they will reveal numbers in place of the symbols. Those numbers will then add up to give you the number of freespins that you will receive. You can receive anywhere up to a whopping 115 freespins!

What’s more, during the freespins you can also benefit from an additional special feature called the Blizzard feature. In order to trigger it, you will need to land any symbol stacked on the first reel. In other words, you will need to cover reel 1 with the symbol of the same kind. Then, all other symbols on the screen of that type will spread across the screen horizontally to the first reel, filling all positions in between. That way you can instantly score very large wins and put that together with the potentially large number of freespins – jackpot!

Wolf Cub is very advanced, both graphically and in terms of the gameplay it offers. Though it’s generally medium variance, you can win pretty handsomely during the bonus round, thanks to the Blizzard feature.