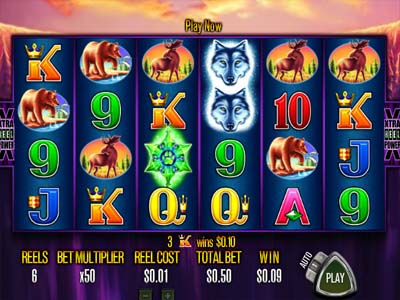 A game called Wolf Moon instils ideas of howling wolves, moonlit backdrops and frozen wildernesses. However, this game from Artistocrat goes in a completely opposite direction. Instead of a soundtrack incorporating noises from nature’s wild creatures, the sounds of a noisy casino full of slot games and people chattering can be heard throughout the game, while a backdrop of a cloudy sky has been included. The reels themselves do include icons of wolves, as well as other selected animals like elks, elephants and toucans.

The game itself has six reels and four rows worth of a layout, with a total of 4,000 ways to win included alongside. The coin value incorporated is able to be switched between the minimum of £0.01 and the maximum of £2.50. The bet multiplier is always active at times 50, therefore providing a total maximum wager availability of £125 per spin.

The pink-lit moon acts as a wild symbol and substitutes for all the other symbols on the reels, except for scatters. This appears on reels three and four only.

The scatter symbol is represented by the green amulet symbol, and this pays no matter the position. A win of three, four, five or six scatter icons will activate the lucky zone bonus feature, which provides 12, 24, 30 or up to a maximum of 40 freespins, respectively. During this round, the lucky zone feature is activated, which comprises the two middle places on reels three or four. This is enclosed by a square. If one, two or more wilds land in a place in the lucky zone, all positions in the lucky zone transformes into wilds. Reels three and four are held in position, and one extra bonus spin on all the other slotreels is won.

Wolf Moon is a game that has a strong theme, but fails to incorporate it fully into a product. The soundtrack has very little to do with the game, which is a bit of a let down. However, the added extras are compelling enough to maintain gameplay.