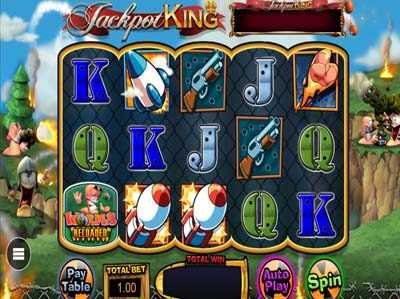 Worms Reloaded is a fun slot game based on the original strategy, where the goal was to use various weapons and kill the opposing worms. No killing is necessary in this Blueprint Gaming slot machine, though. The backdrop does depict several heavily armed worms that don’t look particularly friendly. This game is full of different special features, which makes it pretty attractive, aside from the quirky 3D graphics. The symbols include the different colored lower value playing card symbols. Each appears to have been shot at least a couple of times and they range from Ace to Jack. Following them are a few weapons, including a revolver, a worm bomb and two different missiles. The game logo is the highest paying of the regular symbols.

The layout is pretty standard, with 5 reels and 3 rows. There are 20 paylines that are not subject to adjustment. Betting amounts come in a very flexible range starting with a min bet of 20p per spin and reach up to a maximum bet £500 per spin. The return to player percentage (RTP) here, however, is on the lower end at 92.66%.

The Wild symbol here can appear in any position on the reels and replace any regular symbols to help create winning sequences. However, it cannot substitute for the Bonus symbol. 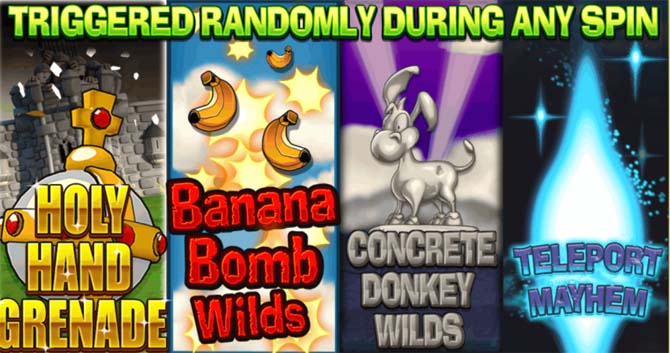 This game also has a regular Bonus symbol which can grant you another one of 4 different bonus features. You will need to land 2 Bonus symbols on reels 1 and 3, whereas the bonus symbol that you land on reel 5 will determine the exact feature you trigger. For example, you can have the Jet Pack Bonus feature, where you will have to progress along a trail of UFO cash trail. The Super Sheep Freespins feature will award you 6 freespins and a pick-me game. Another pick-me game can be offered by the Battleground Bonus feature. And what’s more, you can also take a swing at the progressive jackpot in this slot.

Worms Reloaded is all about special features and bonus rounds, so brace yourself for some intense action. You can also trigger the different features fairly often, so gameplay has just the right amount of diversity.