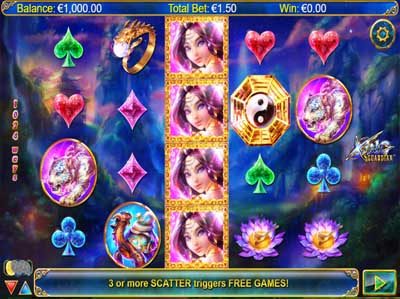 Xing Guardian is an incredibly picturesque slot game by the well-known developer NextGen Gaming. This slot has a Chinese fantasy theme and looks like it’s been hand painted. The graphics are reminiscent of watercolors and it all has a very flowy and colorful feel about it. Another pleasant touch is the fact that the backdrop will actually change if you’re in close proximity of landing a bonus. The soundtrack is just as magical and enchanting, which offers a great touch to the general atmosphere.  The symbols are also very detailed and feature the lower value playing card suits: hearts, spades, clubs and diamonds. Following them is a delicate pink water lily and a golden ring, shaped as a dragon with a pearl in its mouth. Next up are the giant tortoise, the tiger, the bird and the dragon.

The setup of Xing Guardian features 5 reels and 4 rows, with 1024 ways to win. Bets can be rather expensive starting at a minimum of 50p per spin and reaching up to £125 per spin. Players will, however, be pleased to know that the RTP is also at a pretty high mark at about 97%.

This slot game features both a Wild and a Scatter symbols and has plenty of goodies in store for you. The Wild is the second highest paying symbol and it can appear in any position on the reels. It will replace all regular symbols in order to contribute towards winning combos. However, as is custom, the only symbol it will not substitute for is the Scatter symbol. 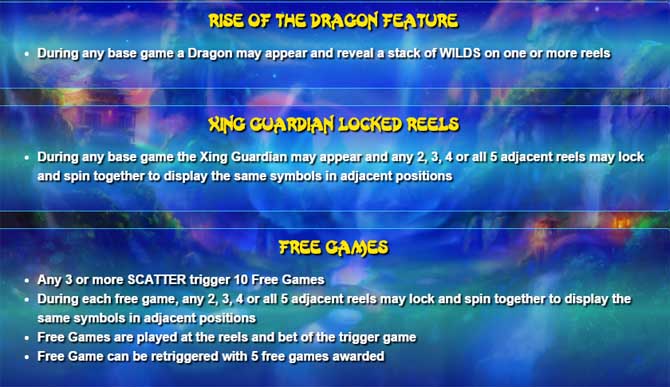 Now, before we get to the Scatter and its benefits, we should first also mention that this slot game offers random bonus features. The Locked Reels random feature will see to it that anywhere up to all five reels can lock together. And then there’s the Dragon feature, which will randomly grant you stacked Wilds on up to several reels. As for the Scatter, it comes in the form of a Yin Yang symbol. It is the highest paying symbol on the reels, offering payouts of up to 500 times your stake. And what’s more, it’s also responsible for triggering the freespins feature.

Xing Guardian is a very entertaining slot game that is as rewarding visually, as it is in terms of its bonus features. There’s plenty to like about this slot game, as well as the fact that you can expect good wins both in the base game and the bonus games.