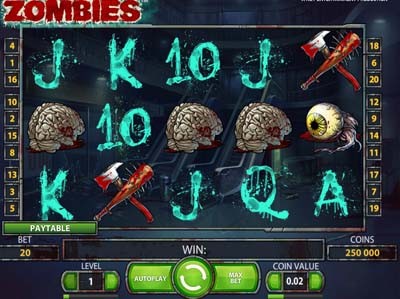 Blood. Guts. Gore. Brains. You’ll find it all in this scarefest of a game from Netent. Backed by one of the creepiest soundtracks to have been included in a game, Zombies offers up reels that are filled with many of the aforementioned bodily items. So amongst all the blood and gore, you’ll be able to welcome symbols of brains and eyeballs, as well as weapons that can be utilised against such creatures, including nail-studded baseball bats and axes, gas masks and circular saws.

Players will be able to place wagers on a five reel and three row strong layout, which also offers up 20 fixed pay lines. The game’s coin value is able to be altered between the minimum of £0.01 and the maximum of £1.00 per pay line, while the in-game bet level is also changeable from one up to 10. This gives all players the opportunity to place a maximum overall wager of £200 per round.

There’s a wild symbol included in this game, which can appear on reels one, two, four and five. These will substitute for all other icons on the reels in order to create a winning combination, apart from scatters.

The stacked wild, in the shape of a violent looking zombie, can only appear on reel three. If only part of the stacked wild appears, it is nudged up or down to cover the whole reel when it is included in a win. This doesn’t appear during freespins.

There’s also a random wild feature, which can appear after any spin which hasn’t achieved freespins or included stacked wilds. Up to six symbols from the round which activated the feature can be changed into wilds.

Scatter icons in the shape of vials containing zombie-killing formula will trigger five freespins, should you manage to spin three of these across reels two, three and four. For every zombie that you manage to shoot in freespins, a coin win is awarded and multiplied.

If you’re a fan of horror-influenced products, Zombies will offer up a great game for you to play.