Arcade Bomb is an online slot game that’s here to take you back to the good old days of arcade games. Are you ready for the nostalgia? This slot game is brought to us by developer Red Tiger Gaming, which is notorious for its high quality graphics. Here, the emphasis is on recreating that arcade atmosphere, so you can clearly discern the pixels. The backdrop in this slot depicts outer space and there’s a futuristic (for that time) electronic soundtrack to add to that vibe. As for the symbols here, they are those you’d recognize from old-school slot machines. Such are the traditional fruit icons: cherries, lemons, oranges, strawberries and watermelons. Then increasing in value are the BAR and golden bell symbols. And last but not least, the most valuable symbol here is the lucky number 7. 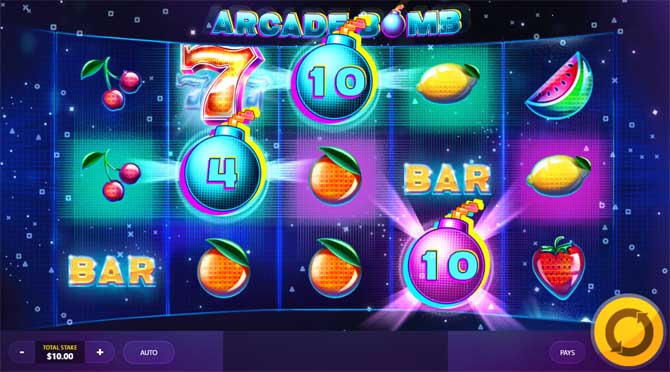 The layout in Arcade Bomb features just the regular 5 reels by 3 rows. There are 20 paylines in total, but better yet – all wins also pay adjacent! Traditionally for Red Tiger slots, though, you won’t be able to adjust the number of paylines. But not to worry, as the betting range is also pretty flexible with the minimum bet at 20p per spin. The maximum you will be able to wager here is £500 per spin. The RTP is 95,00%.

As you will notice, this slot game doesn’t boast a Wild symbol. There are no Scatter symbols or traditional bonus features here either. Instead, this slot has something called Bombs. They come in four different colors, each with its own pattern. There’s yellow, blue, green and purple. Whenever you land any of these on the reels, they will each display a number on them. That number will be the countdown of spins until they explode. Hence, the Bombs will lock in place for that number of spins. After that, they will detonate, turning every symbol in their blast pattern into an identical mystery symbol. 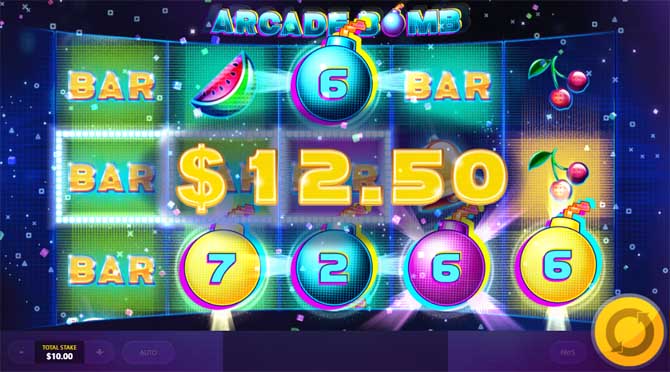 Naturally, the most lucrative possibility would be for the mystery symbol to be the lucky number 7. With payouts of up to 1,000 coins, you will certainly want to look out for it.

Arcade Bomb is loads of fun, despite not boasting any traditional bonus features. The theme will probably be entertaining for most players. But, of course, the main attraction is the unique bonus feature that comes in the shape of the bombs. In addition, the low to medium variance will see to it that you get to win frequently.