Atlantis – the compelling mystery of the sunken world that once thrived and was the home of an advanced civilization. This is probably the epitome of an adventure theme. Atlantis World is a great online slot game brought to us by software developer GameArt. The backdrop here is a mesmerizing deep blue of the underwater world, where you can see remnants of colossal buildings. As for the symbols here, they comprise a variety of exotic and unusual icons. First off, we have the customary playing card icons that don’t fit in all too well. But that is made up for by the rest of the symbols. They include a dolphin with jewels and gold encrusted ornaments, as well as two character symbols, as well as a sea lion. A literal sea lion, not what you see in nature shows. 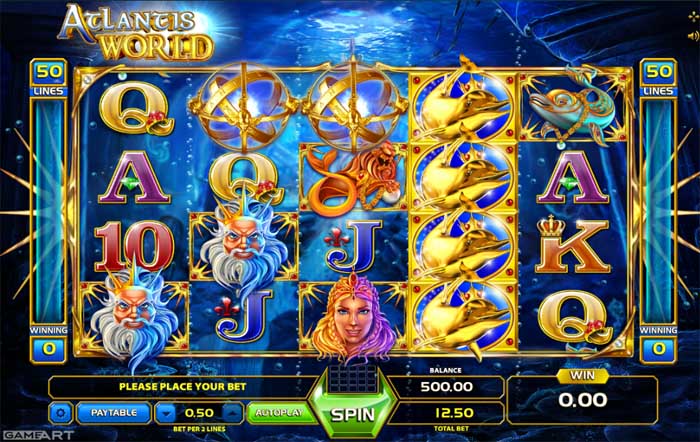 The layout here includes 5 reels and 4 rows, with a total of 50 paylines in total. They are not subject to adjustment, though. Bets here, however, are place per 2 paylines, which will make for possible betting amounts start at 25p per spin. The maximum amount you are alowed to wager here is £12.50 per spin. In addition, the RTP here is at the standard for this developer mark of 96%.

The gold dolphin with the crown on its head is the game’s Wild symbol. As with all wild symbols, it can replace any of the other symbols on the reels to help create winning combos. Wilds can also appear in any position on the reels. However, the only symbol that the Dolphin Wild cannot substitute for is the Scatter. 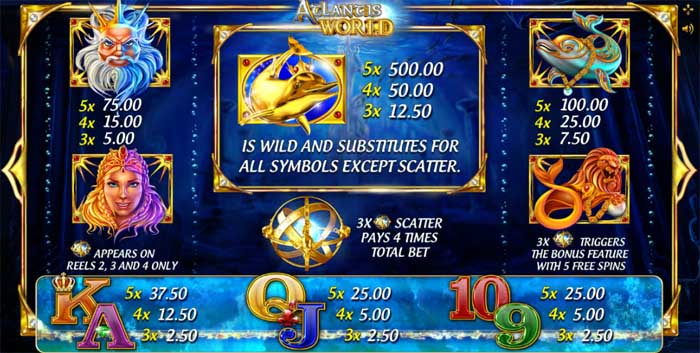 You will want to keep a special eye out for the Scatter, though. It can only appear on the middle three reels 2, 3 and 4. And you will need to land all three Scatter symbols simultaneously, in order to trigger the single bonus features this game to offer. By landing those 3 Scatters, you will activate the freespins feature and receive a total of 5 freespins. In addition, as a result of this, you will also get a cash award of double your total stake amount. Furthermore, you can also retrigger the feature and receive an additional 5 freespins.

Atlantis World also has a Gamble feature, which you can make use of after any winning spin, including after the freespins. It will offer you a simple side game, where you will need to correctly guess the color of a playing card. If you are right, the amount you entered with will double. But if you’re wrong, you will lose that amount and the game will end. You will have the opportunity to also take several turns at the game, so as to further increase your amount.

Atlantis World is a very visually rich slot game. However, it won’t offer you very large winning opportunities due to its low variance. Wins will be frequent, though.