Casin slots provider GameArt certainly does tend to have a thing for Chinese themed slot games, especially Chinese dragons. Golden Dragon quite obviously is one of those slots. Typically for this provider, the graphics are high quality, but the design is pretty much the same as in other GameArt slots. With a huge focus on the red and gold color scheme, the reels exhibit mainly different gold statues of different animals. Such are, for example, fish, tigers, birds and bats. In addition, there’s also a pot of gold coins, as well as a golden dragon – as the title would suggest. The lower value card icons are also present here and also in gold. They include A, K, Q, J, 10 and 9. In addition, there’s also a very traditional soundtrack here to enhance the theme. 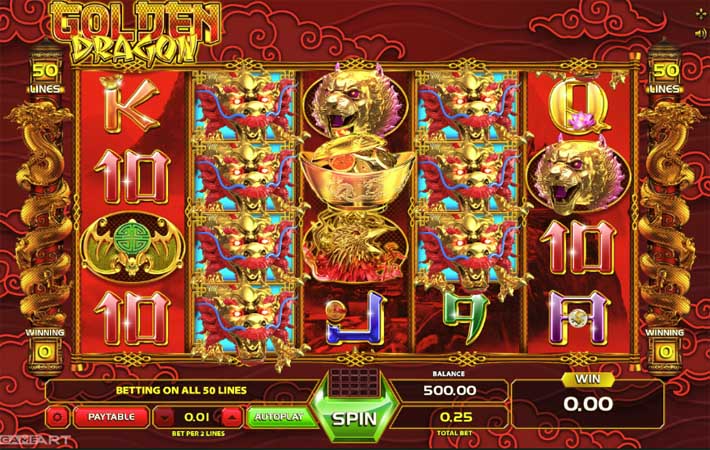 Moving on to the layout of Golden Dragon, it features a grid of the regular 5 reels and 4 rows. The total number of paylines here amounts to 50. And as tends to most times be the case with this developer, you won’t be able to adjust them. Stakes are, however, made per every 2 lines, so it doesn’t impact the betting range too badly. You can bet anything from 25p per spin up to a maximum of £12.50 per spin.

There are a total of 2 special symbols in Golden Dragon, the first of which is the Golden Dragon itself. It represents the Wild symbol and is also the one that will offer you the highest payouts. For landing 5 Wilds on an active payline you can pocket 40 times your total stake. In addition, it can also appear in any position on the screen and can stand in for any of the other icons to help create winning combos. However, the only icon that it cannot substitute for is the only other special symbol – the Scatter.

The pot of gold coins is the game’s Scatter symbol. As such, it can offer payouts without necessarily landing on an active payline, though not really big ones. The only amount you can count on is 4 times your total bet. In addition, the Scatter can only show up on the middle reels 2, 3 and 4. More importantly, though, the Scatter is responsible for triggering the single bonus feature this slot has in store.

By landing all three Scatter symbols, you can receive a total of 5 freespins. During the freespins bonus feature, you will be able to benefit from high pay reels and frequent dragon stacks. Moreover, you also get to retrigger the freespins feature and gain more freespins. You will again need to land 3 Scatters simultaneously and you will receive another 5 freespins on top of what you have left.

Golden Dragon isn’t the most lucrative slot game out there, that much is certain. It’s also not the most original or exciting one. But if you like simple slots and enjoy Asian themed games, then this may very well be your slot.