Five Star Luxury is a wealth themed slot game by software developer GamerArt. Couple all the glamour, riches and high-life imagery with the traditionally high quality GameArt graphics – and you’ve almost got a real work of art there. Visually, this really is a highly rewarding slot game. The backdrop takes you over the modern cityscape of some glamorous metropolis. The sky is a nice mixture of purple and pink hues, indicating that the sun is setting, and the crazy nightlife is about to begin. That much you can tell from the realistic looking champagne bottles on the reels and the shiny lower value playing cards symbols from A to 9. Other luxury images include gold watches, fancy cars, yachts and private jets. There’s no soundtrack here, though. 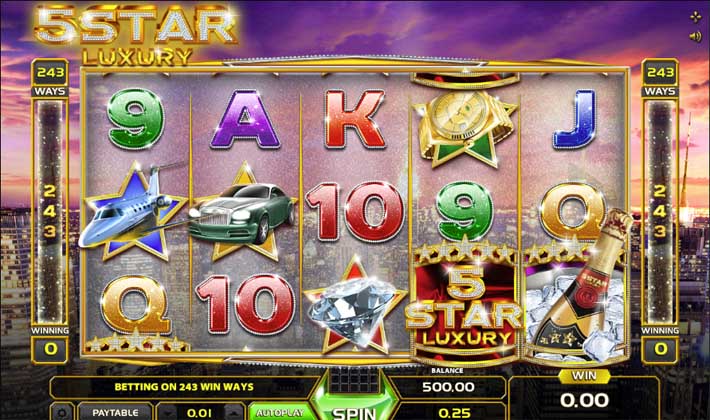 As for the layout in Five Star Luxury, it has the fairly common gird of 5 reels and 3 rows. However, the number of paylines isn’t what you come across every day, especially not with this developer. There are 243 ways to. Stakes here also have a wider range than in most other GameArt slots, starting at 25p per single spin. The maximum amount you will be able to stake here is £12.50 per spin. As for the RTP, it’s standard for this provider and still pretty aggregable at 96%.

The 5 Star Luxury logo symbol is also the game’s Wild and can, therefore, replace any of the other symbols on these reels to help create winning combos. That is, of course, with the exception of the game’s Scatter symbol. The Wild here doesn’t really have any value of its own, though. And furthermore, it can only appear on the middle three reels 2, 3 and 4.

And that, in turn, brings us to the Scatter – the only symbol the Wild cannot replace. It comes in the shape of a high-end designer champagne bottle, surrounded by ice cubes. This is the game’s most lucrative symbol and will offer you payouts of up to 500 times your total stake. With that in mind, you can probably deduce that this isn’t a really volatile slot game. And, sadly for some, that will be all that the Scatter symbol can offer players. This means there are no genuine bonus round in this slot game to diversify gameplay.

There is, however, a Gamble feature here. After any winning spin, you may take advantage of it for the chance to double your winnings. It will offer you a simple game of double or nothing. Your goal will be to guess the color of the top playing card, which can either be black or red. If you are correct, you will have doubled your prize, after which you can have another go or just collect your win and exit the side game. But it you lose, you will lose the whole amount.