Dragon King is a Chinese themed online slot gamy by software provider GameArt. However, it doesn’t quite have the same vibe that you get from most other slots with this theme. In fact, this one is just radiating adventure, destiny, danger… you know, all the good stuff. And it even has a matching soundtrack to enhance the ambiance. And it’s also not something you’d expect to hear from an Asian theme slot game. The symbols here, on the other hand, are pretty traditional and include the lower value playing card icons A, K, Q, J, 10 and 9. Other symbols include golden statues of frogs, koi fish, turtles, bats and gold coins. And lest we forget, there’s also a massive gold head of the Dragon King himself. 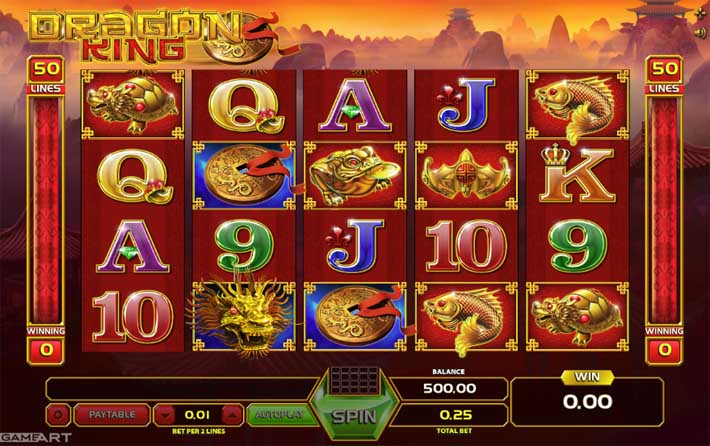 The layout in this online slot features the regular grid with 5 reels, only instead of the customary 3 rows, there are 4. In addition, there are 50 paylines here in total, but they are fixed. So, you won’t have the opportunity to play with a lesser number. However, bet amounts here are made per 2 paylines, so stakes are pretty reasonable, starting at 25p per spin. The maximum amount you can bet in this game is £5 per spin.

The Dragon King symbol we mentioned earlier is also the Wild symbol on these reels. It’s also the most lucrative one here and you can expect to see it in any position on the reels. Furthermore, it can substitute for any of the other symbols to help create winning combinations. The only exception is the Scatter symbol, which is the form of a gold coin, with a red ribbon passing through the middle of it.

The Scatter symbol isn’t really worth all that much and you can only have it land on the middle three reels 2, 3 and 4. But it is responsible for triggering the single bonus round here: the Dragon King Freespins bonus feature. Once you land all three Scatters during the same spin, you will activate the feature and receive a total of 5 freespins. In addition, you will also have the opportunity to retrigger the feature. You will again need to land all three Scatters on reels 2, 3 and 4. This will award you another 5 freespins on top and will also offer you payouts equal to 2x your total bet.

Furthermore, Dragon King also happens to have a Gamble feature in store. After each winning spin and even after the bonus round, it will give you the option of gambling your prize. You will enter a simple game, where you will need to guess the color of a playing card. A correct guess will double your amount, whereas a wrong one will take it away.

If you are familiar with other slot games by developer GameArt, then Dragon King is likely to resemble a fair share of them. The bonus feature here is very simple, as is overall gameplay, but – as always – the graphics are outstanding.