Yet another highly captivating slot from Yggdrasil, Big Blox is . However, instead of relying on some sort of narrative or bonus features, Big Blox keeps the player’s attention with frequent hits, excellent graphics and a very interesting, thematic soundtrack. Speaking of the theme, Big Blox appears to be heavily influenced by the ancient cultures of South and Central America, as evident from both the backdrop and the accompanying music.

Enough about the fluff, and let’s talk about the crunch. Big Blox features five reels, three rows and a whopping 243 paylines. This translates into lots and lots of hits, so it’s bound to keep your attention for a while. The max bet is 25 coins per spin, while the minimal bet is a single coin. Given that the coin value varies from 1p to ₤4, this gives us a stake range going from 25p to ₤100 per spin.

Special Features
This would be a good time to explain the game’s name – Big Blox feature big blocks (shocking, isn’’t it?), which may vary in size from 2×2 to 5×3. These are formed from identical symbols that are grouped together, and the good news is that even wilds are included. Speaking of which, it should probably go without saying that the wild can stand in lieu of every other symbol, save scatter. However, this doesn’t even matter in Big Blox, as there are no freespins, ergo, there’s no need for a scatter to trigger them. This is a minor gripe which would’ve been a major one if it weren’t for the theoretical maximum jackpot (not the progressive kind) of 3,888 times your stake.

As far as paytable goes, the most valuable symbol would be the wild symbol, obviously, which looks like a traditional Mayan golden mask with letters reading “wild” in front of it. The paylines require the winning combos to have symbols in adjacent reels, at least three of any. If one such combination has three of a kind with a solitary symbol and a big block, it will be multiplied by 4. Of course, you’ll want five of any to get the most out of any combination, especially one of the masks, as these are the high paying symbols. Assuming you do land five of any, here’s how much you stand to win, in ascending order: clubs 50x, diamonds 60x, spades 70x, hearts 80x, blue mask 150x, green mask 200x, purple mask 250x and red mask 400x. 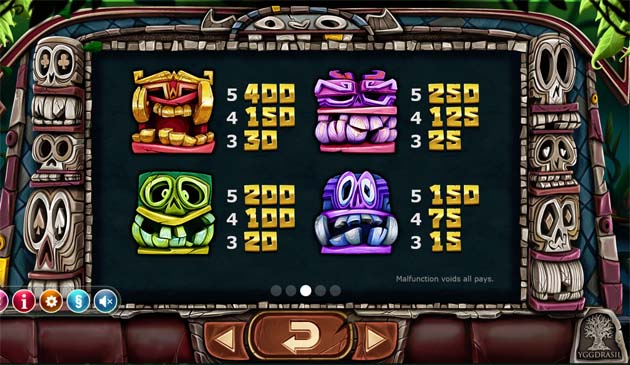 Summary
When all is said and done, Big Blox comes off as a pretty basic, but fun slot. Granted, there are no freespins or other type of bonus rounds, but the base game is interesting enough. Moreover, it also has a lot of potential, in a financial sense, thanks to the 243 paylines and the big blocks of symbols. In other words, you may not get big multipliers and massive jackpots, but you’ll get lots of small ones, which is almost as good.