Count Spectacular is an online slot game by developer RTG. The game has a comic approach to the theme of the famous vampire Count Dracula, which you will be sure to recognize as soon as it loads. The graphics are vividly quite dated, but they have a fun cartoonish vibe. In addition, the developers have included some entertaining animations here and there. Some features the vampire Count himself, where you can also hear him let out a sinister laugh. The setting is the inside of Dracula’s haunted castle. You can see the eerie columns on either side of the reels rising up above them. And behind the reels you can see the purple sky through the gothic window. As for the reels, these have a dark blue background to set a nice contrast for the rest of the monsters. 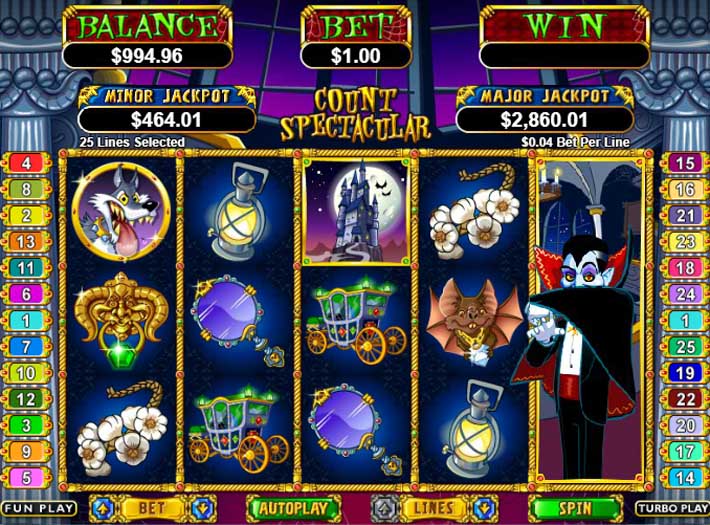 The symbols in this title start off with the symbols of a handheld mirror and a lantern. After this, there is a slight increase in value for the next couple of low paying icons. And these are a bunch of garlic and a menacing golden doorknocker in the shape of a gargoyle. In its mouth it holds a golden ring with a very large emerald. Next are another couple of lower value symbols, one of which depicts a vampire bat with a gold chain around its neck and a large diamond. And after that is a carriage symbol. This brings us to the higher value icons, starting with a coffin. After that there’s a depiction of a pretty fierce dog or a wolf. Then there is quite the dramatic increase in value for the zombie butler, and last but not least is the scared blonde girl. The layout in Count Spectacular features the conventional grid of 5 reels and 3 rows. And the total number of available paylines is 25. However, these aren’t fixed, so you can regulate them if you so choose. With this in mind, the minimum stake on these reels will set you back just 1c per spin. And the largest possible amount you can wager in this game is $6.25 per spin.

The Count Dracula symbol acts as the game’s Wild and it also happens to be the most lucrative icon on these reels. As such, it will be able to offer payouts of up to a whopping 10,000 coins. But on the other hand, it will also be able to contribute to winning combinations by replacing any of the regular symbols. You can also expect to land the Wild in pretty much any position on the reels, at any point during gameplay. Furthermore, whenever it appears, it will also expand to cover the whole reel it is on. Another thing that we just have to point out is that, unlike in the vast majority of other slots, the Wild here can even substitute for the game’s Scatter.

In turn, the Scatter symbol pictures the castle on top of the hill, with an unnaturally large full moon behind it. It can also appear in any positon on the reels, but its main attraction is only the fact that it can offer scattered wins. That’s not to say that Count Spectacular doesn’t have a special feature – it does. But that brings us straight back to the Wild. If you can land the Count on both reels 1 and 5 simultaneously during a spin, this will trigger the Count Spectacular feature. 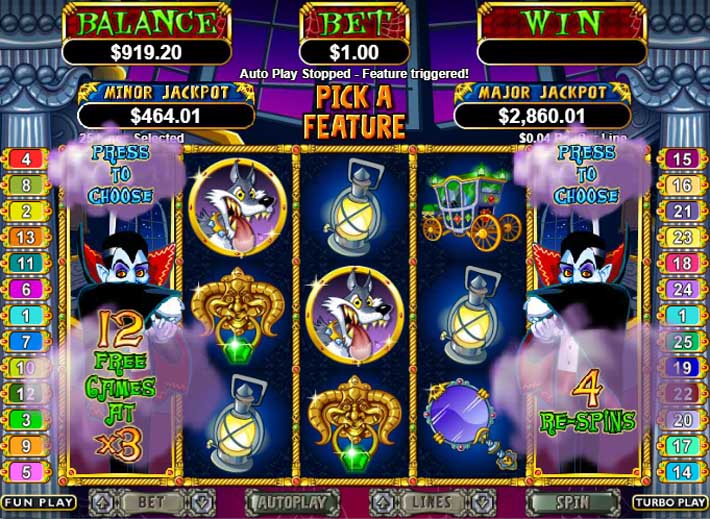 As a result, you will be able to choose whether you would like to play 4 respins or 12 freespins. The freespins also come with a 3x multiplier, making them all the more appealing. And on top of that, they will also offer you the opportunity to retrigger them. Just get the Count to appear on reels 1 and 5 again at the same time, and you will receive an extra 12 freespins.

As for the respins feature, the first and last reels will lock in place with the Count on them. And after this, 4 consecutive respins will occur. However, you will not have the possibility to retrigger this feature and earn additional respins. Last but not least, this title also comes with a Progressive Jackpot. And you can monitor it at all times just above the reels. You can also win it randomly after any spin.

Count Spectacular isn’t the most sophisticated online slot game on the market, but it’s still a very decent offering. It has a fun theme and even some entertaining visuals. What’s more, there’s the interactive special feature to appreciate, which we thought was a great touch. And on top of that, the expanding Wilds tend to grace the screen with their presence pretty often. That can certainly contribute to more prizes, although in the freespins and respins those will be even bigger.