Chances for big prizes will always attract the attention of players, and you can’t get much bigger than progressive jackpot slots when it comes to online casino play. The popularity of these games is evident by the fact that there are still tons of players getting in on the action with titles that, for all objective purposes, have older styles of play with dated graphics and features, in many (but not all) cases. The opportunity to win a life-changing sum of money is clearly a critical part of the experience for these players.

The basic idea behind online jackpot slots is that they have one or more progressive jackpots that are somewhat separate from the rest of the pay table. The jackpot will start at a predetermined amount called a seed value, and then it will increase in size for every wager placed on the game until it’s won. Then the jackpot resets back to its seed value, and the process repeats itself over and over. Since it gets bigger and bigger until it’s won, these prizes have a chance to get very large, which is a major part of the appeal of the games in the first place.

How to win whese progressive jackpots

There are generally two ways that players can win a progressive in one of these online slots, and it just depends on the rules of the game as for which of the two methods will apply. One way to handle the game is to have it randomly award the jackpot on any given real money spin, which is popular with companies like Realtime Gaming. The other way is that players have to hit a certain winning combination or win a certain prize in a bonus feature, an approach favored by Microgaming and Net Entertainment, for example.

Objectively, it doesn’t really matter which of the two methods are used because you’ll still have a predetermined chance for winning the jackpot on any given spin. Some players have a preference for one method over the other, but most of them don’t actually have much of an opinion since they just want an opportunity to win big.

Another reason the jackpots can get so large in some cases is that they’re pooled across multiple sites that use the same software. Two good examples of this are the Mega Fortune game by Net Entertainment and the Mega Moolah slot from Microgaming. The basic idea is the same with each of these titles in that all of the instances of the game across several different sites share the same jackpot. The end result is that the prizes increase faster and get larger on average, which attracts more players and offers chances for some incredibly life-changing payouts for the lucky winners who take down the top jackpots in these games. 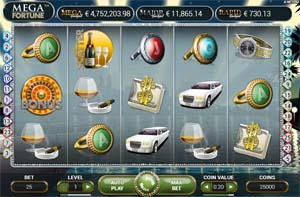 While there are tons of different online slots with progressive jackpots, there are a select few that are considered the most popular in the industry as a whole. A good example of this is the Mega Moolah slot by Microgaming. This is a 25-payline video slot with a safari theme and a top progressive that starts at the $1 million mark. Its main competitor is the Mega Fortune slot by Net Entertainment, another game with a top prize that’s always worth at least $1 million. This game also has 25 paylines on a traditional 5×3 video slot format, and like Mega Moolah, it also has multiple progressives that players can win on any given spin.

Another NetEnt-powered progressive slot is Hall of Gods. This game is based on Norse mythology, and it features deities like Odin and Thor with a chance to win bonus features like free spins. It also has three progressive jackpots, the largest of which starts at the $1 million mark. Realtime Gaming also offers Aztec’s Millions, a game with a progressive that also starts at $1 million, along with other big progressives like Spirit of the Inca, Megasaur and Shopping Spree.

The largest wins in the entire online gambling industry come from progressive slot payouts. At the time of this writing, the current record is held by Microgaming’s Mega Moolah for a sum of €17,879,645.12 (or about $20,062,600). That record was set on October 6, 2015. That just barely broke the previous record, which was held by Net Entertainment’s Mega Fortune slot, for a total of around €17,861,800. It was pretty interesting to see these wins separated by a relatively small amount of money, but winning is winning as far as Microgaming is concerned.

A number of other payouts from both of these games have weighed in on the eight-figure level, and there aren’t really any other games that have come close, though several have paid in the upper seven-figure range.

The bottom line is that progressive jackpot online slots are popular for a very important reason, and that reason is that players can completely change the course of their lives in a single spin with a prize so large that they will never have to work again if they don’t want to. In some cases, their children would never have to work again either. There’s obviously a lot of weight given to opportunities like these, so it makes perfect sense that these games get so much attention.