Down the Pub Slot

Down the Pub slot review

Down the Pub is an incredibly visually rich slot game by software manufacturer Playson. It has a distinct 3D feel on the one hand, but the details here are also very impressive. First of all, the developers have evidently taken the pub theme very seriously. You will actually bin in a real pub, with the authentic atmosphere and even the local boozer to keep you company. Even the laid back soundtrack here makes you feel like you’ve just entered a pub. The symbols here include the letters B, O, N, U and S. Aside from them, you will also see various drinks, such as beer and whiskey. You will even see a beer keg – can’t have a proper pub without one. And in addition to those, there will be some traditional beer snacks available as well, such as the obligatory fish and chips. 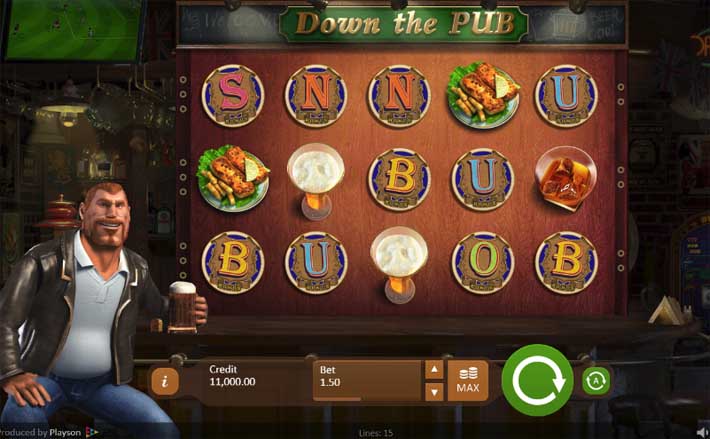 The layout in Down the Pub is fairly common, featuring the regular grid of 5 reels and 3 rows. There are 15 paylines here in total, but those are fixed and, therefore, not subject to adjustment. You are, of course, free to set your desired wager amount, though. Stakes here can range anywhere from 30p per spin and up to a maximum of £75 per spin. The slot RTP is 95.73%.

Down the Pub special features

There are several special symbols in this slot game, the first of which is the Shamrock beermat Wild symbol. It can appear in any position on the reels and replace any of the other icons to contribute towards winning combos. The only symbols it cannot replace, though, are the Pint and Scatter symbols.

The latter comes in the form of the big guy, raising his glass in a welcoming gesture. You will be looking to land three of these Scatters anywhere on the reels in order to activate the freespins bonus round. The best part about this feature is that you can receive anywhere up to a whopping 70 freespins. It will all depend on how frequently you land the Pint symbol during the freespins. The Pint can only appear during this bonus round and every time it does, you will receive a multiplier. After the first one, it will be 2x, whereas after the second – it will be bumped to 3x. Finally, after you have landed the 3 Pint, you will receive a multiplier of 10x and one last spin. Then the feature will end.

You can trigger the only other Bonus Game by spelling the word B-O-N-U-S on reels 1 through 5. You will then get to spin a classic slot and win prizes there. Players will be able to trigger this feature both during the base game and during the freespins bonus.

Down the Pub slot review summary

Down the Pub is a genuinely unique and fun slot game. The unusual theme and superb graphics quality certainly add to this slot’s overall appeal. But the real treasures are hidden in its bonus rounds – especially in the freespins feature. However, this is a medium variance slot game, so it won’t allow for life-changing wins.