Epic Journey is an Asian themed online slot game by software developer Red Tiger. Red Tiger always tends to want to stun players with its high-end graphics and sophisticated design. And Epic Journey certainly lives up to that aspiration. The backdrop takes us to a misty valley at the foot of steep hills. There’s plenty of greenery and fine detail to marvel at, as well as a neat little footpath winding into the distance. As far as the symbols go, things are fairly simplistic here. For the most part they feature the lower value playing card icons A, K, Q, J and 10. In addition to them, there is also a thick scroll and a crown. The latter is also the highest paying of the regular symbols, offering prizes of up to 120 coins. 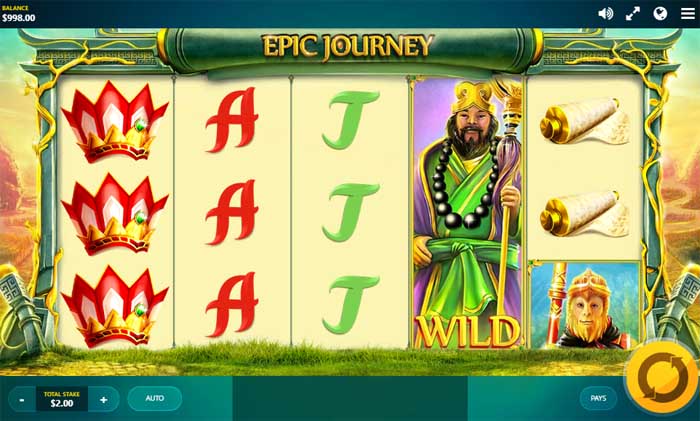 The layout in Epic Journey features just the regular 5 reels and 3 rows, with a total number of 20 paylines. As is often the case with slots by this provider, you won’t be able to regulate the number of paylines. However, you can easily adjust the amount you would like to wager per spin. Stakes here span from only 20p per spin and up to a maximum of £500 per single spin. In addition, the RTP is also fairly satisfactory at 96%.

There are four different Wild symbols in this slot game, including a monkey, a prince, a pig and an emperor. Furthermore, all of these can appear anywhere on the reels and can also appear in stacks. Not to mention that the Wilds are the most lucrative symbols here, offering payouts of up to 1,000 coins. And of course, since they are Wilds, they can replace any of the other symbols to contribute towards winning combinations. 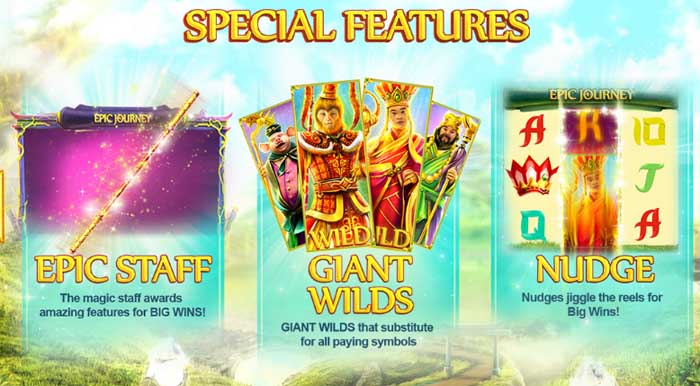 Aside from that, Epic Journey also boasts a bunch of random features. Three of them can be triggered by the Epic Staff, which can appear at any point during the game. Mega Tile features, for example, will see a colossal 3×3 symbol appear and secure you some payouts. Another feature is the Magic Nudge, which will nudge the reels either up or down to help you land more winning combos. And last but not least, there’s the Magic Reels feature. This one will transform random symbols into the same highest value one. 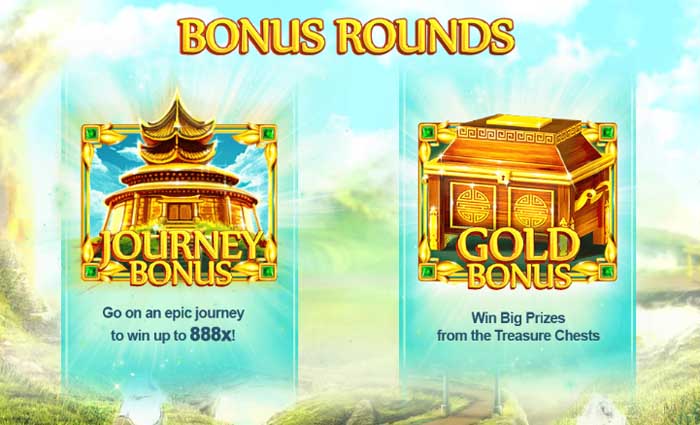 In addition, there are also 2 different bonus symbols in this game: the Gold Bonus and the Journey Bonus. The latter is a cash trail feature, which you can trigger by landing 3 or more of these symbols. Then the Gold Bonus feature will present you with 10 gold pots to choose from. You can get up to 5 picks here and reveal very rewarding multipliers or even extra picks.

Epic Journey is a medium variance slot game that will offer you nice wins at even intervals. The random features can take place pretty often, which is great. However, the bigger wins are both in the bonus games, but they may be harder to trigger.