Golden Fish Tank is a slot game by the swedish game developer company Yggdrasil. And like many other Yggdrasil slots, this one demonstrates the full graphics potential of its developer. The visuals are of really high quality, which already on its own can make gameplay a lot more pleasant. Evidently, the scene takes you underwater, only it seems like it’s also open water, and not a tank. You will see various deep sea and other kinds of fish on the reels. And in the backdrop you can see the clear ocean floor with light from water’s surface reflecting on it. On either side of the reels there are corals in different shapes and sizes, and there are two mysterious streams of air bubbles that appear to be constantly rising from below the sandy floor. 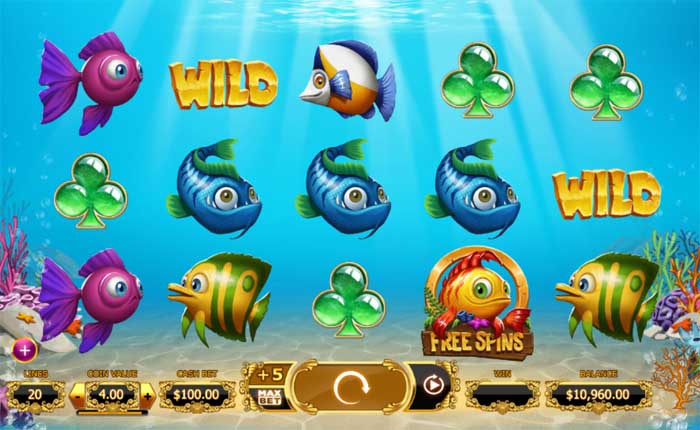 This then brings us to the game’s symbols. First off we have the lower value playing card suit icons. These are shaped like gemstones and each come in a different color. The lowest paying of them are the blue diamonds and green clubs. Then there’s a slight increase in value for the purple spades, and finally we have the red hearts. Besides them, Golden Fish Tank also has four higher value symbols, and these are all different species of fish. They each also have character, which is amusing. First is the rather sad purple fish, following which is a happier-looking deep water fish. Following them you will see another fish in blue, orange and white. And last but not least is the curious green-and-yellow striped fish. The layout in this title, it’s fairly traditional, featuring 5 reels by 3 rows. There’s a total of 20 fixed paylines for you to bet on. And speaking of that, betting amounts will depend on whether you would like to make use of the Golden Bet. Golden Bets add an extra 5 coins to your wager amount. So without one, your betting range spans from 20p to £40 per spin. In addition, the RTP is quite decent at about 96.4%.

For starters, be on the lookout for the game’s Wild symbol. You can’t miss it, because the symbol is that exact same word – Wild. It doesn’t offer any lucrative (or any at all, for that matter) payouts of its own. However, you can count on the Wild to land any position, anywhere on the five reels. Furthermore, the Wild will also be able to replace all of the other symbols that we already described earlier. In doing so, it will be able to offer players better chances of creating a winning combination. There is a single exception as to the symbols that the Wild can substitute for and that is the Freespins symbol. 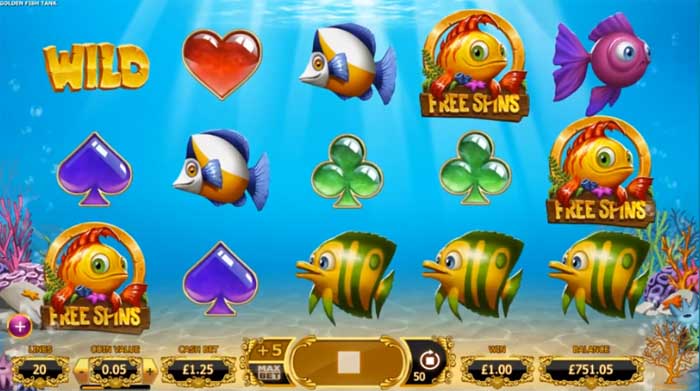 The Freespins symbol, in turn, pictures another bright and colorful fish and can also appear in any position, anywhere on the reels. And just like the Wild, it won’t be offering you any payouts of its own. But it will be able to trigger Golden Fish Tank’s single most attractive feature – the freespins bonus round. To do so, though, you will need to land a minimum of 3 Freespins symbols during the same spin. The more of them you land, the more freespins and feature picks you will receive. 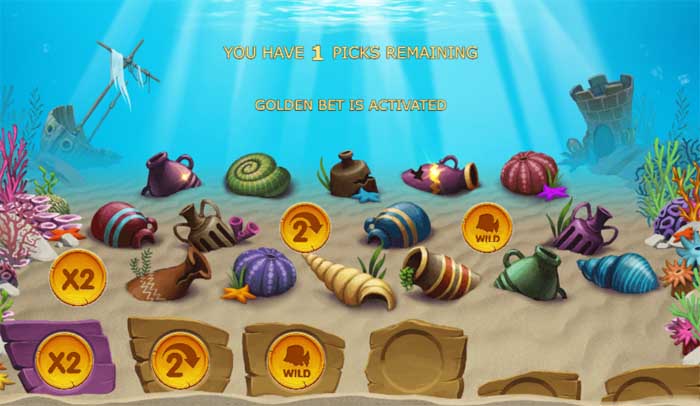 So, 3 symbols will grant you a total of 6 freespins and 3 feature picks. Land 4 of these bonus symbols and you can expect 8 freespins and 4 feature picks. If you are lucky enough to get 5 bonus symbols, you will be awarded with the maximum of 10 freespins and 5 feature picks. Before the freespins begin, you will enter a new screen with a number of different sea shells. You will need to exercise your feature picks and reveal what extras you can benefit from during the freespins bonus round. There are multiple possibilities, among which are, for example, 1 or 2 additional Wilds for every freespin. Alternatively, you can get an extra 2 to 4 freespins. You can also receive reel high stacks of one particular fish symbol during the game. Likewise, one of the fish symbols can also begin to act as an extra Wild. The last option is a Sticky Wild for the duration of the bonus feature.

Now with all of that out of the way, let’s just point out the purpose of the Golden Bet in this slot. With its help, if you trigger the freespins round, you will also receive an additional feature pick. 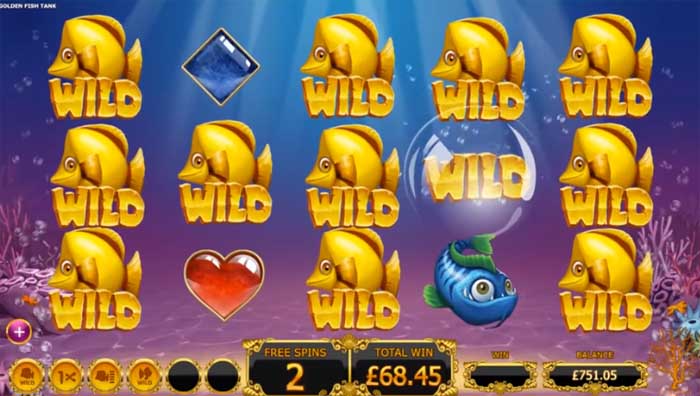 Whether or not you do decide to pay a little extra for the opportunity of gaining an extra special feature during the freespins, you will find that the bonus round can be handsomely rewarding. Golden Fish Tank is a medium to high variance title, so decent sized wins will be coming in at regular intervals throughout gameplay. But the big wins can certainly come out of the bonus round.