Jade Charms is an exquisite, almost artistic slot machine by online slots developer Red Tiger Gaming. This game has a very refined design, with a clean dark grey backdrop and dark grey reels that set a beautiful contrast to all the gold and jade details. It’s almost like you’re in an art gallery or at an exhibition of sorts. The symbols in this slot are a combination of the lower value playing card symbols and different pieces of jade jewelry. The former include A, K, Q, J, 10 and 9, whereas the latter feature a bracelet, earrings, a pendant and a ring. Out of these regular symbols, the jade ring is the most lucrative on these reels. There’s also a very pleasant soundtrack that will accompany gameplay, which certainly doesn’t hurt. 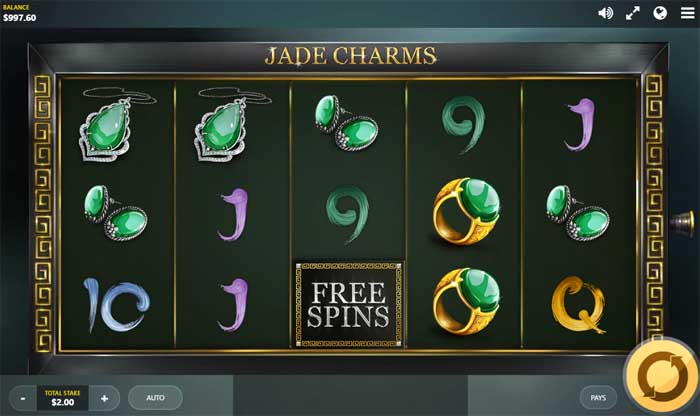 The layout in Jade Charms is pretty much the same as in the majority of modern games, with 5 reels and 3 rows. In addition to them, there are also 20 paylines. But, as is often the case with games by this developer, they will not be subject to adjustment. This will, in turn, make for a betting range that starts at the minimum of 20p per single spin. The high rollers get to bet up to a max of £500 per spin. And the RTP here is also pretty agreeable and is at 96.18% long term return.

The Wild symbol here is the highest paying icon on these reels. You won’t be able to miss it, as it comes in the form of a very styling gold frame and the word ‘Wild’ in it. It can offer you payouts of up to 200 coins for a combination of 5 on a payline. But more importantly, the Wild will be able to replace any symbol on these reels to create a winning pay line. However, it will not be able to substitute for the game’s Scatter symbol. 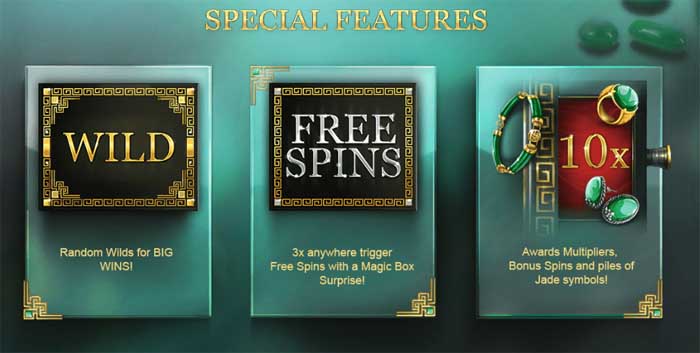 A similar-looking symbol, only with the word ‘Freespins’ in it, is the game’s Scatter. Like the Wild symbol, you can expect to see it pretty much anywhere on the reels. But in order to trigger the special feature it unlocks, you will need to land at least 3 of these during the same spin. This will activate the freespins bonus round, but will also give you a Magic Box Surprise.

When the feature becomes active, you will receive a random number of freespins. And during the freespins round, you can benefit from the Magic Box Surprise, which is a random feature. If you do manage to trigger it, the Magic Box will then reveal to you a prize. It can either be a multiplier, additional freespins or extra jade symbols.

Jade Charms is a classy online slot, with great graphics and a single, yet decent bonus feature. The variance here is somewhere in the medium range, so you can expect to land wins in relatively even intervals.