Jurassic Park is an online slot game based on the cult Steven Spielberg 1993 movie of the same name. And it is brought to you by one of the most reputable software providers – Microgaming. So you can be sure to count on highly entertaining visuals and really exciting gameplay. Indeed, this title offers plenty in terms of features it blends elements from the actual motion picture in very nicely. For starters, the backdrop takes you to the depths of the luxury-attraction-gone-wrong. You will be right in the middle of the prehistoric jungle, with the familiar sign hanging above you. There’s a spooky tropical mist in the distance, of course, and all in all you’re just sitting there waiting for some terrifying giant lizard to charge at you from the dense vegetation. And there’s also a dramatic, enticing soundtrack playing that’s very reminiscent of the original, but not quite the same. 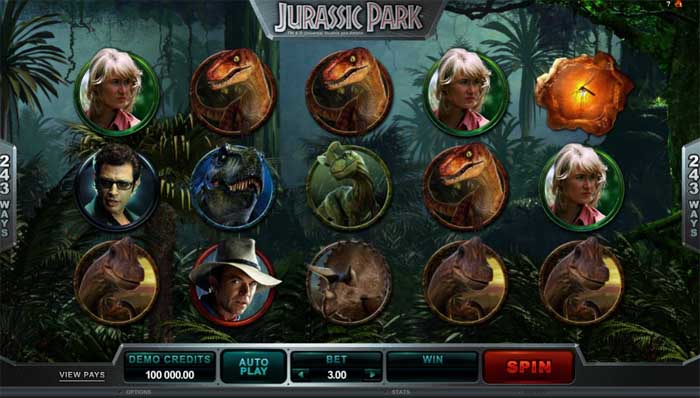 As for the symbols, the lower value icons feature a number of the dinosaur species in the park. First is the treacherous little dilophosaurus. You know, the one that gave old Dennis a pretty hard time. Then we have the triceratops, following which is the friendly giant brachiosaurus. Then last but not least we have the two most vicious species: the cunning velociraptor and the mighty t-rex. This brings us to the four character symbols you will be sure to recognize instantly. They are Ian Malcolm, the lawyer, and Professor John Hammond – the mastermind behind it all. And finally we have Ellie and the main character – Alan, portrayed by Sam Neill. The layout in Jurassic Park features the common 5 reels and 3 rows, with a total of 243 ways to win. With this in mind, you won’t be able to regulate the payline yourself here – or at all, for that matter. Stakes here have a decent range starting at 30p per spin. And the maximum amount you will be able to wager on these reels is equal to £15 per single spin. In addition, there’s a fairly satisfying RTP of 96.67%.

The Jurassic Park logo symbol acts as the game’s Wild and can appear in any position, anywhere on the five reels. On top of that, it also happens to be the second most lucrative symbol only after the Scatter. And the Scatter symbol, in turn, is the only icon in this game that the Wild will not be able to substitute for. All other symbols that appear on the screen it can replace. And in doing so, the Wild will be ensuring better winning opportunities for you and potentially also higher wins. 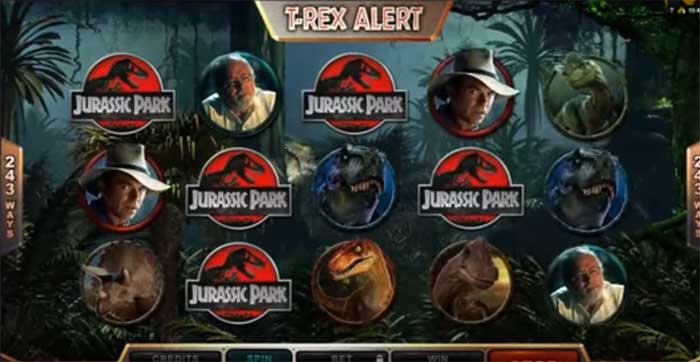 In addition, you will also see that the Wild can appear in full reel stacks during a feature called the T-Rex Alert Mode. This is a random feature that can take place at any point during gameplay. When active, it will last for 6 spins and you will see a t-rex appear in the backdrop. All in all, you can benefit from up to 35 Wilds on the screen during this feature. As for the Scatter, it’s dramatically lucrative and can also land in any positon on the screen. And on top of that it will also be able to trigger the game’s freespins bonus round. 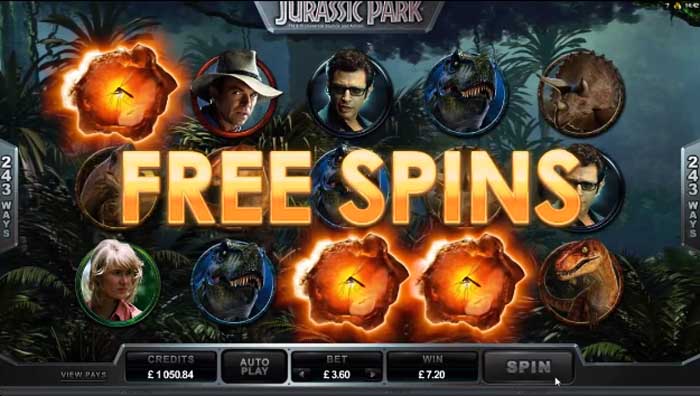 Just be on the lookout for 3 or more Scatters landing on the reels simultaneously. This will award you a total of 12 freespins with different extras, depending on which of the five features you land. Each has to do with one of the dinosaurs in the game. Each of the respective dinosaur symbols will also appear stacked during their feature.

So, the T-Rex feature will award you Wild reels, with up to 5 reels turning fully Wild. The reels turn wild during random spins in the feature, and you can have everything from one reel, to all five turn wild.

Next up, the Triceratops feature will see to it that for every freespin, you will receive an additional Wild the reels. Meaning that the last spins in the feature will have a lot of wilds on the reels, give you a good chance of a big hit. This is probably the feature with the biggest potential in regards of big wins. 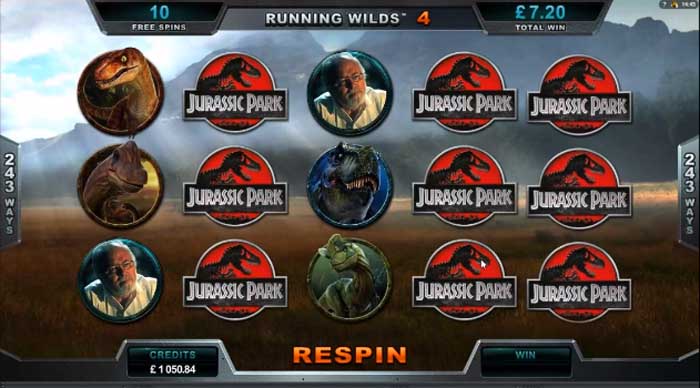 Then there’s the Brachiosaurus spins, offering you a Mystery Multiplier. It will award you a multiplier of 2x up to 6x over a random number of spins. This is also the only feature that will allow a retrigger.

And last but not least, the Dilophosaurus feature will turn random positions on the reels into Wilds. In addition, those Wilds will remain in place so long as they contribute to winning combos.

We would put Jurassic Park in the medium to high variance range, which is great if you’re looking for a nice balance of winning and losing streaks. You will be able to trigger the freespins round at fairly decent intervals, in line with other slots on the market. And on top of that you have a whole array of special features to enjoy. Not to mention that the visuals here are truly exceptional. Our favorite of the features is the rolling wilds feature (Triceratops) as we feel this has the biggest potential of the features. This feature can however also give poor returns, so it is a bit of a hit and miss with this one. We do however like that you are able to pick the feature you want after you have trigger the bonus 25 times, before that you are given a bonus feature by random. Some people chose to play it on minimum stakes to unlock all the features, so that they can choose the bonus feature they want when playing with their usual stake.