Extra 10 Liner is a rather simplistic slot game by software manufacturer Merkur Gaming. We have known this provider to develop slot games of similar setup that don’t offer overly sophisticated graphics and dramatic bonus features. Extra 10 Liner doesn’t quite stray from the standard and you’ll see what we mean in just a bit. For one, you will undoubtedly notice the very basic design of the game. The backdrop features the generic dark blue backdrop, which provides good contrast for the reels. And the reels themselves picture symbols we’ve seen in other Merkur games before. They start with the gold watch and stack of coins, following which is the bag of money and the ring. Then there’s a stack of banknotes and three different colored gems: red, blue and white. The white one offers the highest payouts. 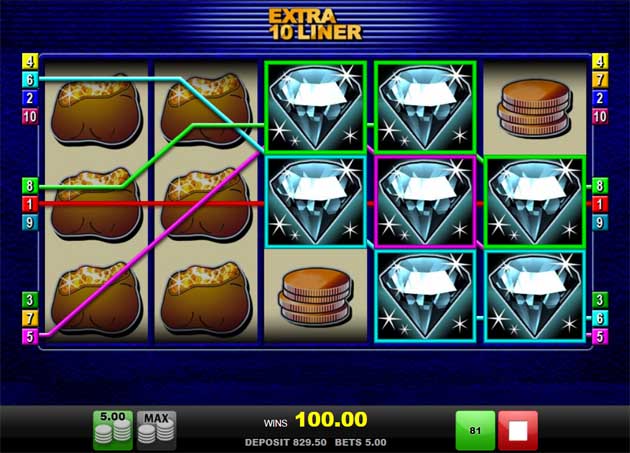 Setup is also quite familiar, featuring the customary 5 reels and 3 rows. There are 10 fixed paylines in total – no more, no less. Stakes can range from a minimum of 10p per spin up to a maximum of £20 per spin. If you’re familiar with other Merkur slot games, you might also be able to guess the RTP of this one – 96.12%.

As is often the case with simple slot games, they tend to lack any real bonus features. This means no Wild symbols, no freespins, no pick-me games and no other extras like that. However, we should point out that all the symbols on these reels can appear stacked, which can contribute towards winning combos. Furthermore, you will also notice that you can make winning combinations both from left to right and from right to left. This will offer even better opportunities for landing winning sequences.

And even that’s not all – the winning combinations don’t necessarily need to starts from the first or last reels. The middle reels can have winning combos just as well! This make for increased possibilities to score some nice payouts.

The only other remarkable thing about Extra 10 Liner is its Gamble feature. It offers a nice opportunity to diversify gameplay, as well as potentially increase your winnings. What’s even better is that you actually get to choose the exact type of Gamble feature you would like to play. The options include the regular side game of playing cards, where you need to guess the correct color of the top card. It can either be black or red, so you will have a 50/50 chance of doubling your amount. But watch out, because a wrong guess will end the feature and you will lose your prize. The other option includes a skill-based ladder game, which has roughly the same principle.

Extra 10 Liner can be quite fun and tends to suck you in, even despite its simplicity. But this is also reason for caution, as this game’s high variance can make for large wins, but also pretty big losses. If you like the old school slots, you will love Extra 10 Liner from Merkur Gaming.