Matsuri is the word they use in Japan for a holiday or a festival. It is also the title of a colorful and entertaining new slot game by software provider Play’n GO. This game has plenty of things going on in terms of its visuals. For one, the graphics are fairly sophisticated and very well coordinated in terms of the color scheme. In addition, the backdrop offers this unusual and very beautiful panoramic view of the night sky over a lake. On either side of the screen, there are tall hills or mountains overlooking the lake. And each of those hills has a bunch of small pink and orange lights littered at its foot. The festive atmosphere is further continued by the audio effects in this game. You will hear a crown cheering, as well as traditional music sounding somewhere in the distance. 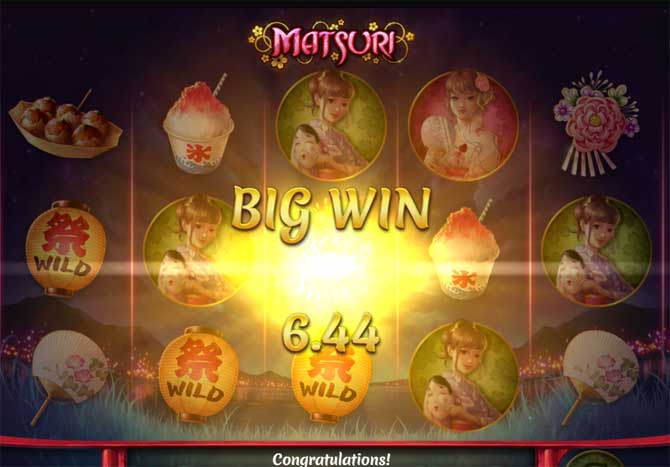 Players familiar with Japanese culture are sure to have a blast with this slot game. And foodies here will probably enjoy it just as much. For one, the symbols here offer different Japanese foods, and it’s not the stereotypical sushi, mind you. First in line are the delicious dango dumplings, traditionally served on a stick. Then there’s a common desert of shaved ice, better known as kakigori. Following these is the third and final Japanese dish on these reels: takoyaki. Summing up the last of the two lower value symbols, we have the handheld paper fan and a lovely flower decoration. Next are three character symbols of three young girls, each with a different colored flowery backdrop behind her. There’s pink, green and blue. The setup in Matsuri offers the fairly common layout of 5 reels and 3 rows. The total number of pyalines here is 25; however, it is not subject to adjustment. This, in turn, makes for a relatively comfortable betting range of 25p per spin up to a maximum of £100 per spin. And as far as the RTP goes, you can count on an average of roughly 96%.

The special features here are perhaps even more abundant than the visuals. But first let’s introduce the special symbols. First up is the most lucrative symbol on these reels – the Wild. It comes in the shape of the very widely recognizable paper lantern. And as is the Wild’s duty, it can replace any of the other symbols on the reels to help create winning combos. The only symbols that it cannot substitute for are the Scatter symbols. In addition, the Wild can also appear in any position on the reels, which will also make winning potentially easier. 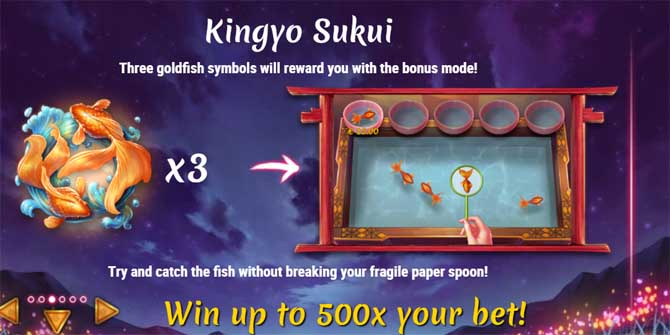 There are two other features that this slot game boasts. One of them is the Kingyo Sukui and in order to trigger it you will need to be on the lookout for the Goldfish symbol. To activate the feature, you will have to land three of these symbols on the middle reels 2, 3 and 4 during a spin. This will bring you to a new screen, with an entertaining, yet challenging bonus game. You will have a very fragile paper spoon, with which you will need to catch goldfish. The game will continue until you have either caught all the fish on the screen, or until your spoon breaks. Each of the goldfish will give you a cash prize for a cumulative amount of up to 500x your stake. 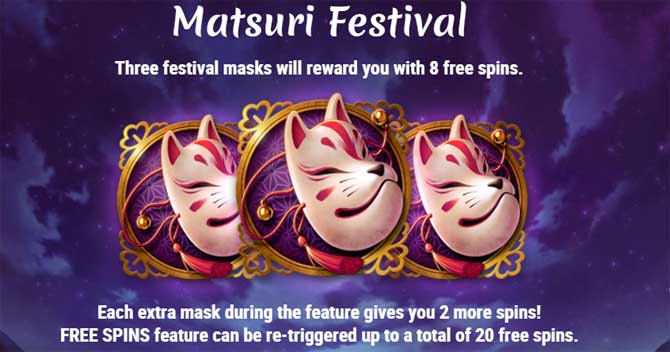 But this isn’t the game’s biggest attraction yet – that would be the freespins bonus feature. To trigger that one, be on the watch for the Mask Scatter symbols. They can only appear on reels 1, 3 and 5. And in order to activate the freespins, you will need to land all three of them during a spin. As a result, you will receive a total of 8 freespins. What’s more, you can also gain more freespins during the bonus round. All you need to do is land another Scatter symbol anywhere in sight and it will grant you an additional 2 freespins. The maximum number of freespins you can gather is 20. But we still aren’t done yet. The Wild symbols will play a special role during this bonus round. Anytime a Wild symbol appears it will expand and cover the entire reel that it’s on. Furthermore, it will remain on the screen for the next spin and move one reel to the left. It will keep doing this until it finally disappears from the screen.

Play N Go have made their fair share of unique and interesting slot games. Matsuri is certainly among them, offering rich visuals and a not too common theme. But what’s more, the high volatility of this slot game makes it especially attractive for those in search of entertaining bonus games and sky-high payouts. In fact, the freespins feature can offer up to a whopping 3,000 times your stake on any given spin.