Mermaid’s Diamond is a slot made by software provider Play’N Go. Evidently, the slot game has an aquatic theme. The animated backdrop takes you underwater, to the very depths of the ocean, and comes to life with the quickly moving schools of fish and occasional air bubbles that float up to the surface. Below the reels when you peer through the mist you can make out an abundance of corals in every shape and size. And beyond that it’s just and endless blue abyss, with only a school of fish interfering with it from time to time. There’s a very grave soundtrack accompanying gameplay. It actually feels like it brings the weight of all those tons of water with it. As far as the graphics quality goes, there is not 3D or HD flashiness to this title. But the visuals are still fairly decent anyway. 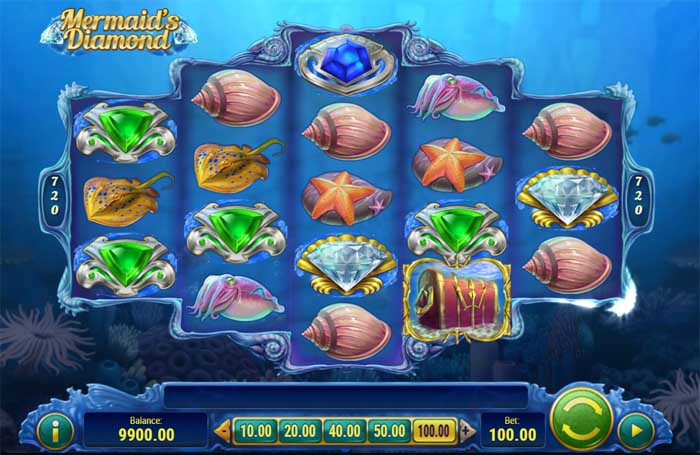 The symbols here also represent an array of different sea creatures. And they start off with what may be a snail, but we can only see the shell. Next on the list of lower value symbols we have a cuttlefish. After that there is an orange starfish laying sprawled on a stone. And we also have a colorful stingray. This brings us then to the higher value icons in Mermaid’s Diamond, and these are all of a colder, inanimate character. Namely, the higher value symbols are all jewels. First in line is the green triangular stone, following which is a deep blue sapphire. Then there’s an even further increase in value for the oval ruby stone and finally we have the most lucrative diamond icon. It can award payouts of up to 10 times your total stake. As for the layout, you will notice it’s not quite the conventional 5 reel by 3 row grid. Here it has 5 reels, where the outermost reels each have 3 rows. Reels 2 and 4 each have 4 rows, and the middle reel has 5 rows. There are 720 ways to win and obviously these are not subject to adjustment. Stakes have a rather comfortable range, though, spanning from 20p to £100 per spin. And the RTP is pretty high, too, at 96.5%.

The pink haired mermaid on these reels is the Wild symbol. It can land in any positon, replacing any of the other icons on the reels. That way it can help players create better winning combinations. But on top of that, this icon also takes part in feature called the Trident Wilds. This is a random feature that can occur at any point during the game. And once it does, it will randomly add Wilds to 1 or 2 reels on the screen. Thus, you can gain even better winning opportunities and therefore higher prizes. The one symbol that the Wild will not be able to substitute for in this game, though, is the Scatter symbol. 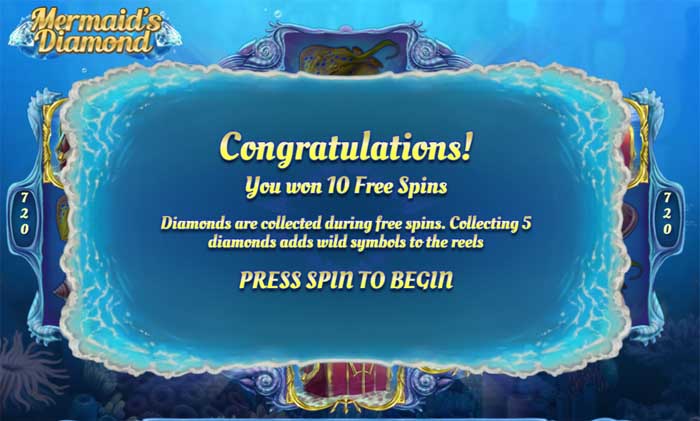 In turn, the Scatter symbol comes in the form of a rather massive treasure chest. It can also land anywhere on the screen, at any time during gameplay. And just like its Wild counterpart, the Scatter doesn’t have any monetary value of its own. Instead, it will potentially trigger this title’s most attractive special feature – the freespins bonus round. But in order for that to happen, you will need to land all five Scatter symbols on the screen during the same spin. As a result, you will activate the bonus round, but before you get to play, you will first need to go through a pick me game. 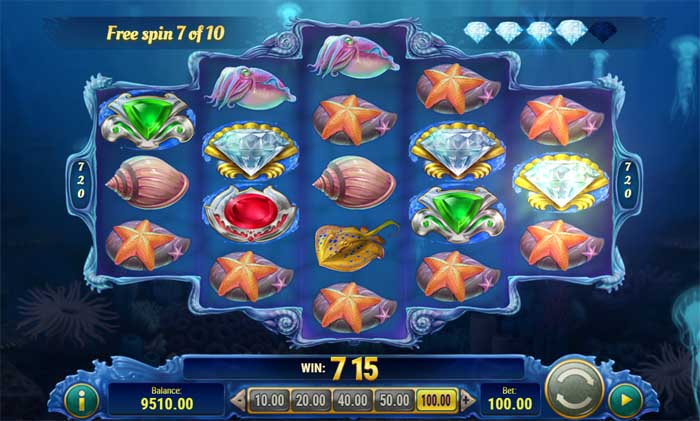 A new screen will present you with a selection of treasure chests and you’ll need to choose one of them. The treasure chest of your choice will reveal the number of freespins you will receive. The chests can award you 10, 15 or up to 25 freespins. But in addition to that, you can also retrigger the feature, adding more freespins to your total count. To do so, you will be looking to land at least 3 Scatters anywhere on the reels. The number of Scatters will correspond to the number of additional freespins you receive. And if you manage to collect 5 Diamond symbols throughout the bonus, you will trigger the Trident Wilds feature. As a result, you will benefit from one fully Wild reel.

Another neat feature Mermaid’s Diamond boasts is Divine Intervention that may make the missing fifth Scatter appear on the reels if you only happen to land four.

Mermaid’s Diamond is a great medium variance offering with a fun theme and good quality visuals. More importantly, though, it will provide you with an exciting and varied gaming experience. The main attraction here is without doubt the freespins round and you will get to trigger it at fairly agreeable intervals. And do your best to collect those Diamond symbols as you do, because those will be sure to maximize payouts.