Piggy Bank is an online slot game by software developer 1X2Gaming. This slot will strike most as incredibly childish looking. So much so, it may as well have been drawn by a toddler. The backdrop features the most typical children’s drawing: a little house in a green field, with a bright blue sky and the smiling sun above the reels. As for the reels, they depicts a bunch of different piggy banks, some less childish than others. Among them are robbers and inmates. Some of the symbols even include wanted posters! There’s even a police piggy, waving his baton, as well as a safe symbol. 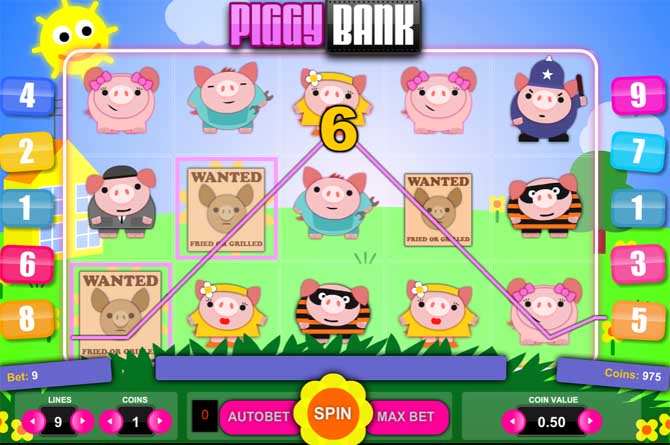 The layout in this online slot game is pretty much the same as in the majority of other games out there. It features a grid of 5 reels and 3 rows. Furthermore, you will also see that there are 9 paylines in total. Players are free the adjust those with the help of the controls that are located just below the reels. Right beside them are similar controls to help you regulate the number of coins you would like to wager. And on the opposite end of the screen are the controls for the respective coin value. Stakes here can, therefore, range from 5p per spin up to £750 per spin. The RTP here isn’t exactly the highest, though, at 95.69%.

The single most relevant (to the title) symbol on these reels is unsurprisingly the Wild. It pictures a pink piggy bank, or the silhouette of one, with the word Wild on it. As any Wild symbol is required to do, this one can replace the regular symbols to help contribute to winning combos. It can appear in any position on the reels, which is good. However, it cannot substitute for the only other special symbol which is the Scatter.

The Rainbow circle symbol represents the Scatter and it won’t be difficult to figure out how it can benefit you. The word ‘freespins’ on it would suggest that it can activate the freespins bonus feature, and that is precisely what it can do. It, too, can appear anywhere on the reels, just like the Wild. Only, unlike the Wild, this one doesn’t need to land on a payline for you to benefit from it.

In order to trigger the bonus feature, you will be looking to land at least 3 Scatters during the same spin. This will award you a minimum of 5 freespins. If you manage to land 4 or 5 Scatter, you will receive 10 or 15 freespins, respectively. Furthermore, during the freespins all wins will be subject to a 2x multiplier. However, the only downside is that you will not be able to retrigger this bonus feature to gain more freespins.

Piggy Bank is very similar to a bunch of other slots by this provider in its simplicity and setup. The single bonus feature may not amount to much, but at least you will be able to trigger it somewhat frequently.