If you’re ready for some antic action, then prepare for one of the most epic slot games out there – Gladiator of Rome. This slot game was developed by slot game manufacturer 1X2Gaming and has a soundtrack to die for. The graphics here aren’t of the most superb quality and there’s no modern 3D or HD feel to them. However, take note of the way the controls and game title are styled, because they greatly contribute to the general atmosphere, too. The symbols here include the lower value playing card symbols that resemble ancient Roman coins. In addition to them, there are warriors of different kinds: soldiers and legionnaires and gladiators.

The layout is fairly common, offering 5 reels and 3 rows. As for the number of paylines, it’s fixed at 20, so you won’t be able to change it. You are, however, free to regulate the coin value, as well as the number of coins you would like to stake. This will leave you with a betting range starting at 20p per round and spanning to a maximum of £25 per spin. Gladiator of Rome has a rather low RTP of 94.20%.

Special Features in Gladiator of Rome

The Wild symbol in Gladiator of Rome is in the form of a fierce gladiator, who is just about to engage in battle. You will find this symbol able to appear in any position on the reels and replace any of the regular icons to contribute to a winning combination. However, there is one single symbol that the Wild cannot substitute for and that is the Bonus symbol. 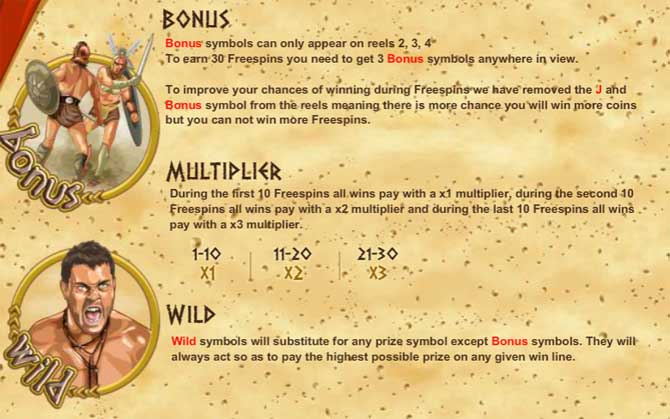 The Bonus symbol, in turn, is a highly valuable one in the sense that it can trigger the single bonus feature. It pictures two gladiators fighting and can only appear on the rightmost three reels: 3, 4 and 5. You will need to land all three of these symbols, in order to trigger the freespins bonus feature. When you do, you will receive a total of 30 freespins. Furthermore, the Bonus symbol will not be present during the freespins feature, and neither will the lowest value Jack.

This means that you will be able to potentially gain higher winning combos. But you won’t be able to retrigger the feature. Nevertheless, there’s still more about it. Each next ten freespins will increase the multiplier you had by one. In other words, for the first 10 freespins the multiplier will be 1x. And for the 11th to 20th freespin, you will enjoy a multiplier of 2x. Likewise, the last 10 freespins will give you a 3x multiplier on all payouts from them. Watch out for the Caesar symbol, as he is the most lucrative icon on the reels. With the ability of awarding up to 1,000 coins in the base game, aim to land combinations with him during the final stage of the freespins feature.

Gladiator of Rome is an entertaining slot game that will really get you in a mood for action. And all the action is in the bonus round.