Now there’s a great name for slot game, isn’t it? … Isn’t it? Well, not to worry, there’s nothing too gruesome about Blood Bank. This 1X2 Gaming slot game offers a comedic take on the infamous villain and most popular vampire character – Count Dracula himself. Set against the misty night sky, with a large full moon shining past the thin veil of fog, you can see the silhouettes of graveyard crosses and tombstones somewhere in the distance. There are a few cross symbols on the reels, too. Aside from them, you will also see more tombstones, coffins, bats and hearts with barbed wire around them. 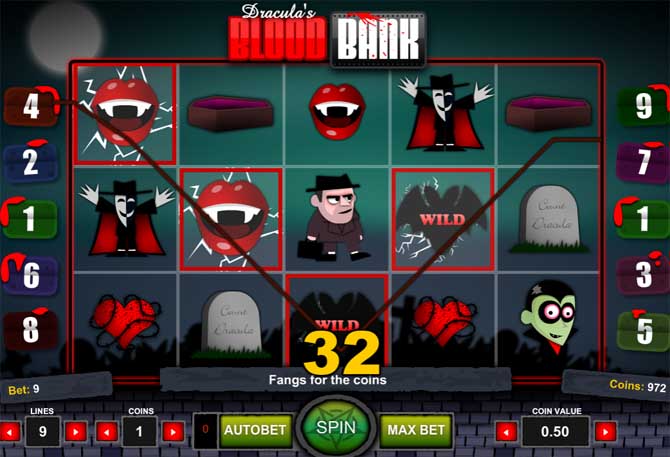 The setup in Blood Bank is fairly traditional – nothing special about the 5 reels and 3 rows. The total number of paylines available here is 9, but their number is flexible. You will be able to adjust it as you please with the controls set just below the reels. Right beside it are similar controls for the number of coins you would like to bet. And to the right you will be able to adjust the coin value. This makes for a very comfortable betting range of 5p per spin up to £750 per spin and a pretty high RTP of 97.32%.

It will be fairly easy for you to recognize the special symbols in this slot game, because it’s literally written all over them. The Wild symbol comes in the shape of a bat figure and the word ‘Wild’ on it. As such, the Wild can substitute for any of the regular symbols to help create winning combos. But the only symbol that it has no power over is none other than the Scatter.

In addition to that, all freespins wins will be subject to a 2x multiplier! However, you will not be able to retrigger the feature, so be sure to make the most of those freespins. Another interesting point here is that you can combine different character symbols to create winning sequences. Thus, if you can get the phantom and any of the two vampire symbols in a combo, they will award you 150 times your total stake.

A great thing about Blood Bank is that you will get to trigger the freespins bonus feature fairly often. True, you don’t have the option of retriggering it, but that multiplier kind of makes up for it. And even the visuals, though as childish they may seem, add a certain charm to this slot game.