Roboslots is a slot game by developer 1X2Gaming. The title is as descriptive as they come and, as you by now may have already guessed, the theme centers on… robots! This mechanic styled slot game will introduce you to several different robotic characters that appear on its reels. But what’s more, everything seems to be some piece of machinery in this online slot. Even the title is made up of different screws and bolts, as well as a number of cogwheels in different shapes and sizes. The lower value playing card symbols are also present on these reels and they match the theme just great. And last but not least, the soundtrack plays a large part in creating that whole robotic vibe, too. Featuring a number of different electronic sounds and a monotonous single note in the backdrop, it does a great job for this theme. 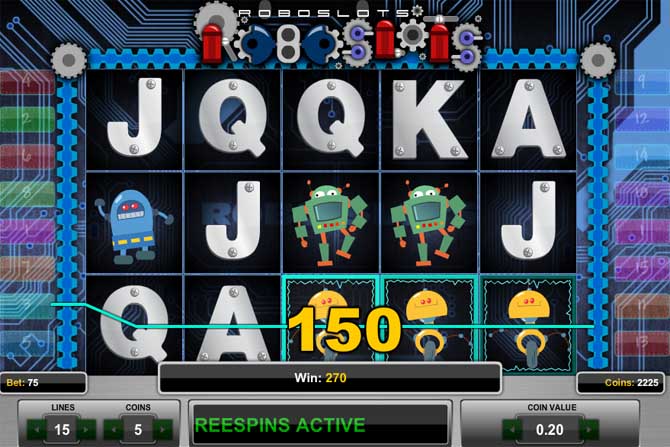 As far as the layout and setup go, Roboslots features 5 reels and 3 rows, as do most other modern day slot games. The maximum number of paylines that are available here is 15, but you may just as well play with anything less. The controls are the same as in most 1X2 Gaming slots and also include options for regulating the coin value and number of coins you would like to wager. Stakes here can span from the minimum of 15p per spin and up to a maximum of £37.50 per spin. The RTP of Roboslots is set at 96.25%.

There are three different special symbols in this slot game, the first of which is the game’s Wild. It also comes in the form of an odd-looking robot, only it will be able to replace any of the regular symbols to contribute towards winning combos. And moreover, it will also be able to double the payouts of any combination that it becomes a part of. However, it cannot replace any of the other two special symbols, meaning the Scatter and the Unicycle Robot. 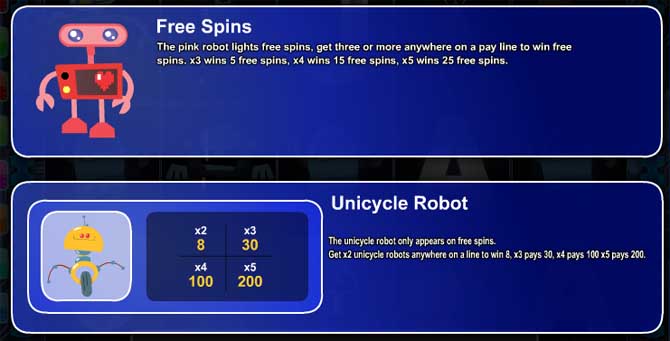 A red colored robot with a heart in its chest represents the Scatter symbol here. As such, the Scatter can trigger the freespins bonus feature in this game. You will need to land three or more Scatters in order to do so, though. Luckily, they can land in any position on the reels for you to benefit from them. 3 Scatters will grant you a total of 5 freespins, whereas 4 will reward you with 15 freespins. Finally, 5 Scatter symbols will offer you the maximum of 25 freespins.

During this feature, you will also be able to benefit from the third special symbol – the Unicycle Robot. It will offer you payouts for landing as little as only 2 on a payline. And for 5 on a payline it will offer payouts of 200 coins.

Roboslots is a fun and somewhat unusual slot game. Like most slots by this developer, gameplay here is rather simple and straightforward. However, as rewarding as that may be to some players, the single bonus feature may not be enough for others.