Power Plant is an online slot game by software developer Yggdrasil that is full of features. It has a very futuristic vibe to it and even though the title is Power Plant, it really looks like you’re inside a space ship. There’s a fairly sophisticated electronic soundtrack that provides that exact feel. But in addition to that, the graphics in the backdrop exhibit exquisitely fine detail, where you see computer screens, cable, lights, buttons, inscriptions and so on. There are also some really fun sound effects that will accompany you spinning the reels. That, too, contributes to the whole technical vibe here and makes it all the more authentic. The controls, as you will notice, also fit the theme and also feature the matching sound effects.

But the real unusual thing in this online slot game is, of course, the layout. The symbols are also pretty unusual and may take a little getting used to in the beginning. However, one of them you will be sure to recognize – the symbol for radioactivity. It is also the highest paying symbol on these reels. And moving backwards you will see similar signs, one with a flame in it, another with a purple bolt of lightning. Sinking further down in value is a whirl sign, following which is a water drop symbol and the lowest value icon here is the green leaf sign. And now back to the unusual layout, you will notice there’s a very tall grid of 5 reels and 8 rows. There are also a whopping 82 paylines, which isn’t the most common number you see in the industry. But bets here are at a moderate price, nevertheless, and start at 25p per spin. The maximum amount you will be able to stake here is £250 per single spin. And as for the RTP, you can expect an average of about 96.10%.

Power Plant is laced with different special features, so it goes beyond just a rewarding visual experience. The glowing yellow W sign is the game’s Wild symbol and you will find it difficult to miss. It can appear in any position, anywhere on the tall reels. And more importantly, it has the capacity to replace any of the other symbols and, thus, help you land winning combos. There are no exceptions as to the symbols the Wild may substitute for. This means, in other words, that there are no real Scatter or Bonus symbols here. But that’s not to say that there will be no bonus rounds or any extras – far from it. Also, the Wild doesn’t really have any real value of its own. In addition, if you can manage to cover an entire reel with Wild symbols, you can gain a Feature Respin. This is the single most attractive feature in this game, and you will see why. 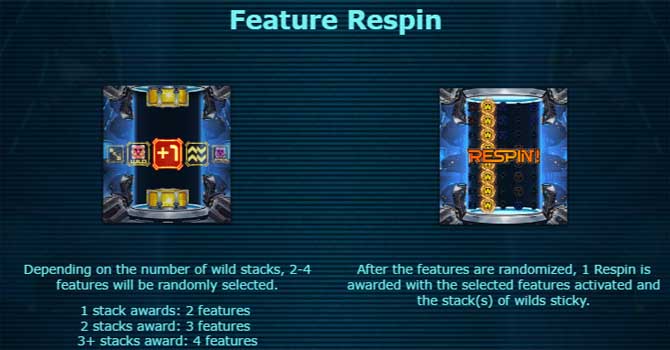 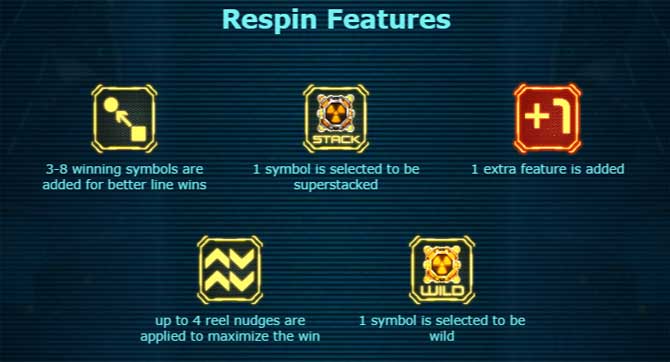 The five different features that you can gain include the addition of anything from 3 to 8 winning symbols to the reels. This will increase your chances of landing higher wins. Another option will result in selecting a random symbol to be superstacked. That way you can also benefit from far greater winning opportunities, especially if that symbol happens to be of higher value. Alternatively, you can also gain the +1 feature. This will, in fact, add an extra feature to your feature count and further improve your chances of winning. Then there is also the reel nudge feature. After the respin has already happened, this feature can nudge the reels 2, 3 or even 4 times. That way the symbols can align to create winning combinations. And last but not least, you can also benefit from an extra Wild. One random symbol of those on the reels will become a second Wild and substitute for any of the other symbols, just as the regular Wild, to further contribute to winning sequences.

Power Plant surpasses what you might expect from the visuals of an online slot even from a developer as renowned as Yggdrasil Gaming. The graphics are of genuinely high quality, as are the animated sequences that you see constantly. Sound-wise this slot has been a very pleasant surprise, as well. And it’s also worth noting how well the developers have managed to pack so many features into one.