Super Flip base game is pretty much… well, basic, without much in the way of bells and whistles. It’s straightforward and all business, just like the players it’s aimed at. Another piece of good news is that the game is playable on a variety of platforms, including desktops, tablets, as well as smartphones, so you can play it at home in during your leisure time, or on the go while you commute.

In a nutshell, this is a slot with 5 reels, 3 rows and 20 paylines. The least you can bet per spin, as well as per line is one coin, whereas the maximum bet is 5 coins. Given that the coin value varies from 1p to £1, this gives you the min / max bet range going from 20p to £100. There are two bonus rounds with anything from 15 to 90 freespins possible. The RTP is fair to middling, to be honest, standing at 96,53%. 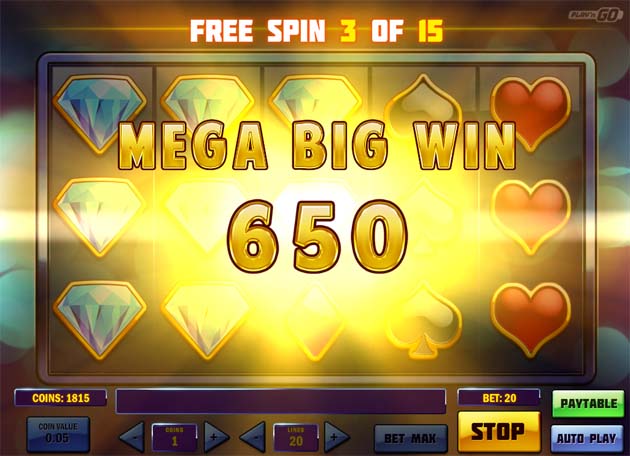 First thing’s first – the symbols. Super Flip features mostly traditional slot and fruit machine symbols – the four card suits (clubs, diamonds, hearts and spades), diamonds, stars, horseshoes, strawberries, as well as two special symbols, wild and scatter. The wild is simply represented by purple lettering that reads “wild” in front of a golden circle, whereas the scatter reads “super flip” in yellow letters in front of a pink burst, with the “f” actually flipped to face left. Of course, it should go without saying that the wild may substitute any symbol but scatter, and that five wilds will be the most lucrative possible combo on a single active payline.

There are two special features – the Near Win special feature that can be triggered in both the base game and freespins, and the fresspins themselves. The former feature will activate if you get two full stacks of the same symbol on reels one and two, but not a winning combo. When this happens, you’ll get a free re-spin on the middle reel, while the rest of the reels remain locked in place. 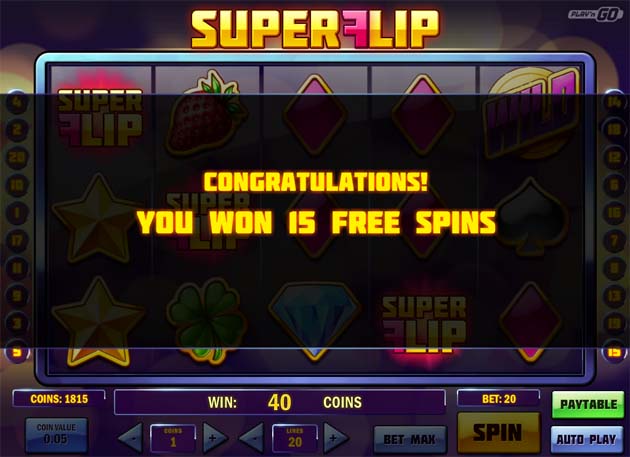 Super Flip symbol, which acts as scatter, triggers the freespin round. All you need is to land three super flips anywhere on the reels. This will give you 15 freespins, as an appetizer, but keep in mind that you can retrigger it during this round, winning up to 90 freespins total in one go. As mentioned earlier, you can get the middle-reel re-spin bonus in this round, as well.

Max possible win during the freespin bonus round is an impressive (to say the least) 1,000,000 coins.  Mathematically, this amounts to 10 000 x your stake, and can happen if you manage to land a full screen of wilds. It’s a snowball’s chance in purgatory, but one can hope.

Super Flip from Play’n GO is the closest thing to a vanilla video slot there is – it features five reels, familiar symbols, freespins, and a potentially massive jackpot (non-progressive)). It’s made by serious punters for serious punters, and it reflects it in all its facets – the graphics are to the point (and nicely executed, incidentally), the gameplay is straightforward, easy to understand and gratifying, and the bonus features are rewarding.