Sweet 27 really is a sickly sweet kind of slot game and it’s brought to us by software provider Play’n Go. Everything you see on these reels is sugary, creamy, juicy or all of the above! So, if you have a sweet tooth – enter with caution. You have got pink maraschino cherries, fresh and appetizing berries and more. And the backdrop, can you guess what that is? It’s light and fluffy white and pink clouds of… cotton candy! So welcome to sugar paradise, folks. We should also mention the soundtrack here, which is pretty cool and helps create a really inviting atmosphere. It also has this deliciously retro feel, probably achieved by the vintage slot machine frame around the reels. 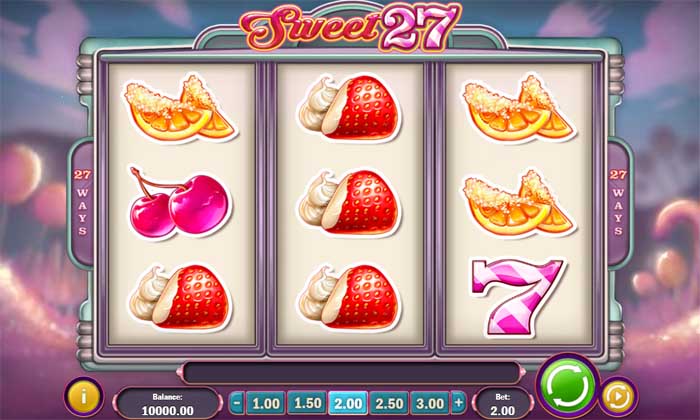 Sweet 27 is after all in the classic slot game genre, so a lot of the symbols here pay tribute to that heritage. And, traditionally, the lowest value symbol in these games has also been the cherry icon. Only here it has a sweeter disguise, coming in the shape of maraschino cherries. In the same low payouts category is the orange fruit slice candy symbol. Following them, we have the strawberries with cream – a delicious treat. And then there are the blueberries. This brings us to the two highest value symbols on the reels, which are also traditional slot machine icons. One is the BAR symbol, which appropriately here comes in the form of a chocolate bar. And last but not least is the lucky number seven, in lollipop form! This symbol will award you 3 times your total stake. As for the layout in Sweet 27, it’s pretty much true to the industry standard for the classic slot machine genre. There are only 3 reels and 3 rows. However, the number of paylines is rather unusual, featuring a total of 27. These are fixed, though, so you can’t regulate them. The betting amounts here are pretty decent, ranging from 10p per spin up to the maximum of £100 per single spin. And you can count on average slot RTP of about 96.1%.

Contrary to what you might be thinking, but Sweet 27 actually features its very own Wild symbol, too. What’s more, it actually happens to be the most lucrative symbols on these reels, too. It comes in the form of a green and white swirl candy with the word Wild on it and can award you payouts of 5 times your total stake. And just like any of the other symbols, it can appear in any position, on any of the 3 reels. In addition, it also fulfills its duties as a Wild by being able to replace any of the other symbols on these reels. There are no exceptions as to the symbols it can substitute for. 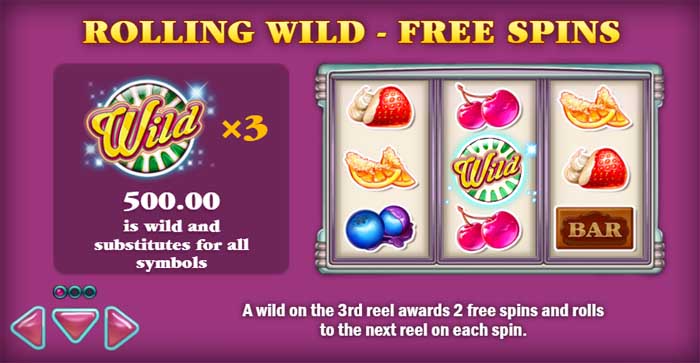 But with that in mind, there’s also another special feature that the Wild boasts. As a matter of fact, it will be able to trigger this slot game’s single bonus feature. So if you were anticipating that the genre and lack of a Scatter implied otherwise, this is our pleasant little surprise to you. So, the Wild here is actually called the Rolling Wild and there’s a reason for that. In order or it to trigger the game’s bonus feature, you will be looking for it to land on the third (rightmost) reel. As a result, this will trigger the freespins round! And you will receive a total of only 2 freespins. However, as you play the freespins, the Rolling Wild will roll to the left one reel for each freespin. This means it will still be around throughout the feature to potentially help you land better winning combos! 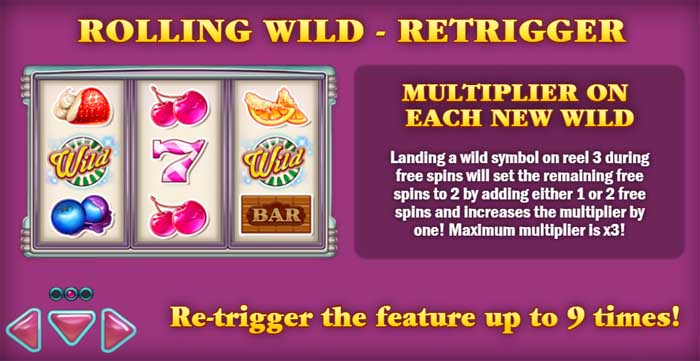 And you can also retrigger the freespins, if another Wild happens to land on reel 3 during the feature. As a matter of fact, you can keep retriggering this feature up to 9 times. In addition, by landing additional Wild icons, you will also increase the multiplier by 1. So, all in all, you can potentially receive a multiplier of 3x on your freespins winnings. And the total number of freespins that you can potentially win here is 20. Not too shabby for a classic slot game, don’t you think? 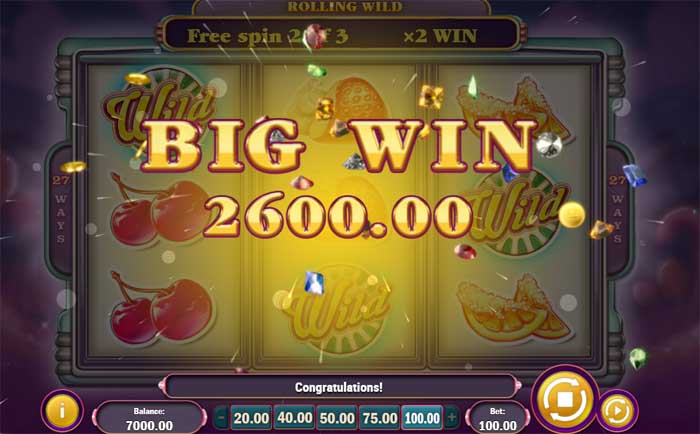 Sweet 27 does surprise you with all of the new features that it keeps pulling from its sleeve. There are Wilds, freespins and even multipliers. First of all, though, we love the design of the game and the awesome 1950s retro feel. The soundtrack also helps enhance that whole vibe, which is great. But on top of all that, do keep in mind that this is a highly volatile online slot game. Though it may not strike you at first, payouts here can potentially reach up to 1,758 times your stake! So, do watch out for your bankroll. But be sure to also have fun with this sweet, sweet game.