Ted is an online slot game by developer Blueprint Gaming and in its basis is the popular feature film of the same name. Now, even if you haven’t seen the comedy starring the inappropriate talking teddy bear, you will still be able to enjoy this game. The graphics in this online slot are genuinely up to standard and you can almost reach out to give Ted a hug. You will see him napping under the reels on a couch. And you also won’t be able to miss the empty beer cans beside him. And in the blurry background you can tell that the party is still going full swing. You can clearly see the neon colors and make out the silhouettes of people. As for the reels themselves, though, among others they include the lower value playing card symbols. They are A, K, Q and J. And aside from that there’s also a bong, a six pack of beer, an angry duck and a female character. Last but not least, there’s also the game logo. 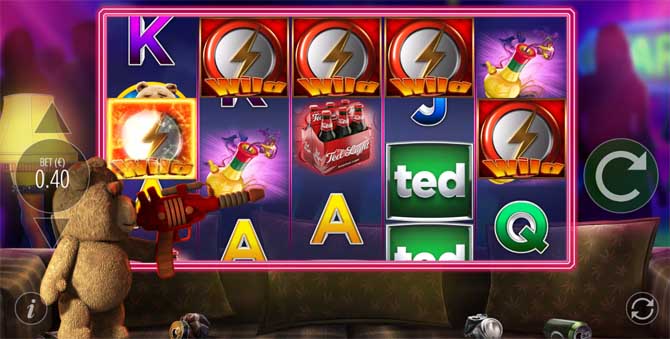 As far as the soundtrack goes, it’s pretty pleasant and laid back. But you will always have the option to mute it, if you would rather play in silence. The layout of this slot consists of the regular grid of 5 reels and 3 rows, so nothing special. There are 20 paylines here in total. And, as they are fixed, you won’t be able to change that. You can, however, regulate you betting amount and set it to whatever value suits you most. The respective controls are very convenient and are just to the right of the reels. Bets here can range from only 20p per spin up to a maximum of £200 per single spin. The average RTP you can expect is pretty satisfactory at 95.81%.

First off, let us just elaborate on that last symbol we mentioned earlier. The Ted game logo is one of the two most lucrative symbols on these reels, but another thing that makes it kind of special is the fact that it can appear in stacks. The other symbol that will offer you just as high payouts is the game’s Wild, which pictures Ted himself. It can appear in any position on the reels and replace any of the other symbols. However, the Wild cannot replace the Thunder Buddies Bonus symbol.

Now, Ted is actually overflowing with various bonus features, and you can access some of them by landing three of more Thunder Buddies Bonus symbols anywhere in sight. Then you will enter a new screen, with a ladder that will reveal which of the 5 bonus features you will trigger. The options include the Wheel of Fartune, for example. This bonus can reveal various prizes from multipliers, to additional arrows for the wheel and cash prizes. What’s more, it can even trigger the Big Money Bonus feature. This is another of the 5 bonuses, which can offer you a cash prize of up to 500 times your total stake.

Then there’s the Bar Crawl Bonus feature, where you will have to move bottles around a board. Here you can also gain cash prizes, multipliers or potentially also enter the Big Money Bonus. Alternatively, you can also get Ted arrested, which will end the feature. Then we have the Super Mart freespins feature, which will give you 5 freespins, with an Extra Wilds feature. And last but not least, there’s also the Flash Freespins bonus feature. You will notice a bonus grid just above the reels with cash prizes, extra Wilds and additional freespins. After every spin, you will get a shot at that bonus grid and potentially score one of its prizes. 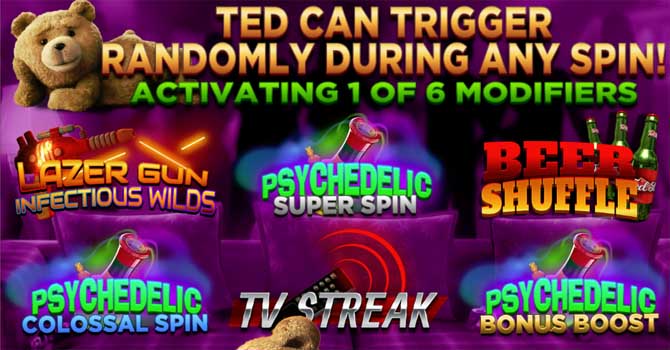 And if that weren’t enough for you, Ted also boasts a whopping 6 random bonus features! They include things like the Laser Gun Wilds feature, where Ted will shoot a laser gun at the reels, turning random symbols into Wilds. The Psychedelic Super Spin feature will see Ted cover the reels in smoke. At that point a special Ted symbol will appear on the reels in multiple positions and transform into the same symbol. Another interesting random feature is the TV Remote Symbol Streak, which can occur after a winning spin. The reels will then spin again, whereas the winning symbols will remain in place. Furthermore, this will keep going on until no more wins can form.

Ted is really a bundle of fun with more special features in it than you can keep track of. If bonuses are what you’re after, then this is certainly the slot for you. It doesn’t hurt that the theme focuses on a popular movie and the graphics are of matching quality. In addition, this is a medium to high variance slot game, so there are some real opportunities to score big here.