No, not having to do with the popular AC/DC song, Thunderstruck II is a fantasy slot brought to you by the creative developers at Microgaming. It also just so happens to be one of the biggest online slot game hits among players and has been around for a number of years now. This slot is actually a follow-up to a previous game. However, the first one didn’t quite have the success that Thunderstruck II enjoys, even to this day. The slot has a distinct Norse or Scandinavian mythology vibe. You can gather as much once you see the Viking ships and Thor – god of thunder. Overall, the graphics are pretty decent, though nowhere near as crisp and fresh as newer titles, but that’s just how it is. There’s also a very peaceful soundtrack in the background that doesn’t get on your nerves after spinning a few rounds. 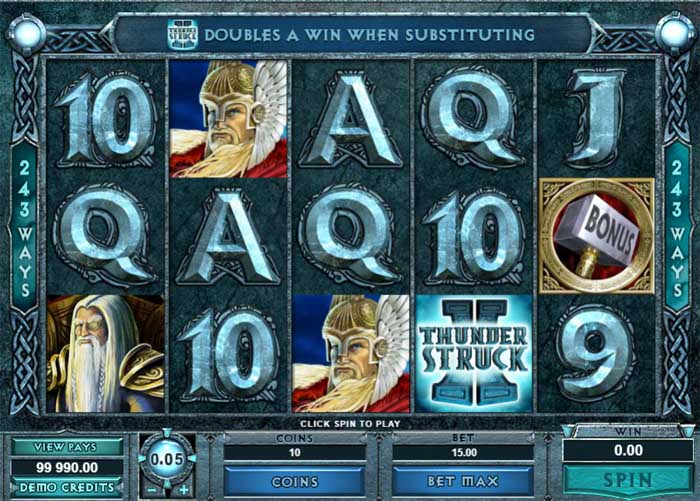 As for the icons in this title, you will notice they start off with the regular playing card icons A, K, Q, J, 10 and 9 that we find in most modern video slots. In line with the theme and overall design, each of them appears to be cut out of stone. The tematic higher value icons start off with the Viking ship that we already mentioned. After that, there’s a magical kingdom on a floating rock, with a rainbow leading to it. We’ll assume it’s the developers’ representation of Valhalla. Then we have the first of the four character symbols – the Valkyrie. After that, there’s Loki, Odin and finally – Thor. The layout in Thunderstruck II features your regular grid of 5 reels and 3 rows. There are 243 ways to win, and you can’t regulate those. Stakes here have a rather modest betting range, though. You can wager anything from the minimum 30p per spin and up to the maximum of £15 per single spin. And also note that the RTP is also pretty decent at about 96.6%.

The Thunderstruck II logo symbol is the game’s Wild. And as such, it will be able to replace all of the other symbols on the reels (except the scatter). And as such it will help you to create winning combinations and potentially higher wins. Speaking of which, the Wild also happens to be this game’s most lucrative symbol, offering payouts of up to 1,000 coins. It can also land in any position on the screen, which doesn’t hurt. And when substituting for a symbol in a winning combo, it will also double the payouts for that sequence. However, the one symbol that the Wild cannot replace in this title is the Scatter.

But before we say anymore, let’s also mention another extra that the Wild comes with – the Wildstorm feature. It can occur at any point during gameplay, completely randomly. And when it does, it can turn up to all five reels fully Wild, hence making for even bigger wins. This feature is identical to the Wild Desire feature we find in Immortal Romance and it can produce very big wins if you are lucky with the wilds. 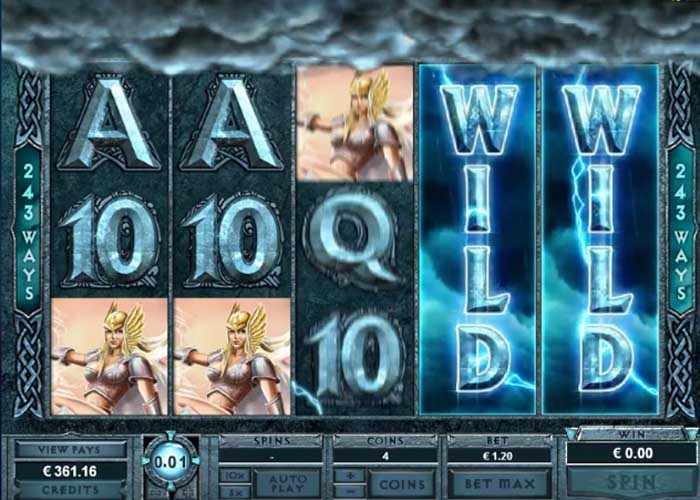 The Great Hall of Spins

Now as for the game’s Scatter symbol, it comes in the form of Thor’s legendary hammer. Just like the Wild, it can also land in just about any position, anywhere on the screen. The payouts aren’t exactly the highest, but it has those as well. More importantly, though, the Scatter will be responsible for triggering this slot’s bonus feature – the Great Hall of Spins. This is a multi-level freespins round, where you unlock each next level, the more times you trigger the feature. 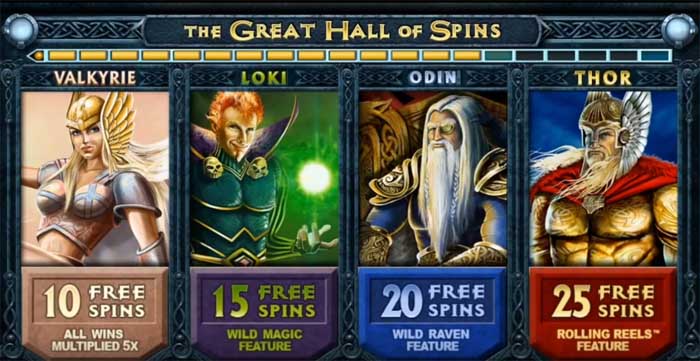 To activate it in the first place, you will need to land a minimum of 3 Scatters during the same spin. The first level available to you is the Valkyrie. It will award you 10 freespins and a 5x multiplier on your winnings. You can also retrigger this feature by landing another 3 or more Scatters. From the 5th trigger of the bonus round, you will also make the Loki feature available. It, in turn, will award you 15 freespins and a Wild Magic feature. In other words, you can benefit from extra Wilds on the reels. Then there’s the Odin feature, available from the 10th trigger. Here you will get 20 freespins and the possibility of gaining 2x, 3x or 6x multipliers as you go. Last but not least is Thor’s feature, which you can access after the 15th trigger. It will give you 25 freespins and Rolling Reels with the potential of gaining up to a 5x multiplier.

There’s a good reason that Thunderstruck II has become one of the most played online slots today. It’s fun, has a popular theme (think all those Marvel movies) and can even make for some exceptionally high wins. Another great feature of Thunderstruck II is that it remembers your progress. So you can take a break from playing and come back to where you stopped. This can be especially useful when unlocking those bonus levels.