Wild Spells is an online video slot brought to you by online slot game provider Pragmatic Play with an enigmatic, magical theme. The focus of this intensely atmospheric title is witches, potions, black cats and all things menacing and supernatural. The backdrop here is a saturated purple, both on the reels and behind them. You can see some glowing objects floating around in the sky above the reels that appear to be stars, but don’t quite behave like them. There’s also a loud, dramatic soundtrack to fit into the gameplay. It may, however, be too overpowering, so no harm done if you would prefer to play with no sound at all. As for the overall graphics quality, we think players will be quite happy with it. Especially fans of the fantasy genre will appreciate the fine detail in most of the imagery. 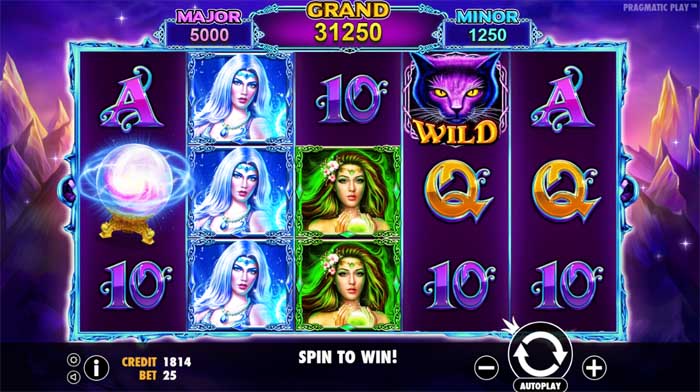 Speaking of which, let’s also introduce the game’s symbols. They include the neat representations of the lower valuable card symbols. And these, in turn, are A, K, Q, J, 10 and 9. Next up are the higher value symbols that have a closer relation to the theme itself. And they begin with the burning candle, which has evidently been burning for a while now. After that there’s a small glass bottle with a green potion in it, following which is a thick book with a blue jewel on the cover. This leads us over to the three character symbols, each representing a different witch. There’s a nature witch, a water witch and last but not least is the fire witch. She is also the most lucrative symbol in all of Wild Spells. The layout in this title is quite traditional, featuring your regular 5 reels by 3 rows. And the total number of available paylines here is 25, but these are fixed. Hence, bets here start at a minimum of 25p per spin and reach up to a maximum of £125 per single spin. There’s also a very decent slot RTP here of 96.4%.

First off, let’s present to you perhaps the most impressive symbol on these reels – the black cat. Actually, it’s more of a purple cat, but we will let that slide. It acts as the Wild and will be able to stand in for any of the other icons. In doing so, the Wild could create better winning opportunities for you. Keep in mind that it can also land anywhere on the reels, and on top of that it can also appear stacked on the reels. But the Wild will not be able to substitute for the game’s Scatter symbol.

The Scatter in turn comes in the form of a crystal ball, which can also appear in any position on the slot. And just like the Wild symbol, it also offers no payouts of its own. Instead, it will be able to activate this game’s single special feature, namely the freespins bonus round. And in order for this to happen, all you have to do is land 3 or more Scatters in any position on the screen, simultaneously during a spin. As a result, you will first need to choose the freespins mode you will enter.

You can receive 20 freespins, where the Nature Witch will become Wild on reels 2, 3, 4 and 5, for example. The second option is for 10 freespins. Only here you will benefit from both the Nature and Water Witches becoming Wilds on those same reels. Last but not least, the third option will only offer you a total of 5 freespins. However, in addition to that all three Witch symbols will act as Wilds on reels 2, 3, 4 and 5. Note also that you can retrigger any of these features if you land 3 Scatter symbols on reels 1, 3 and 5.

Keep in mind that Wild Spells also boasts a Jackpot feature, where you can win one of three jackpots. To achieve this, you will need to land 3 or more full-reel stacks of one of the Witch symbols on adjacent reels. 3 Stacks will award you the Minor Jackpot, whereas 4 will boost the prize to the Major Jackpot. And if you manage to get all five reels covered in the same Witch symbol, this will reward you with the Grand Jackpot. However, note that this feature is only available in the base game.

Wild Spells is a thrilling online slot game with great visuals and a fun theme. Gameplay is pretty straightforward, with pretty much just one special feature. However, it still gives players some interactivity in that they can choose the mode in which to play the freespins round. The jackpots also make for a very appealing touch, offering prizes of up to 1,250 times your total stake. All in all, it’s a very worthy medium variance offering that shouldn’t be overlooked.