If you are up for some hocus pocus and a dreamy, fantasy themed online slot game, then check out Wild Wizards. This title is brought to you by software manufacturer RTG and boasts a truly enchanting atmosphere. For starters, it has a charming soundtrack to enhance the whole magical vibe. And the quality of the visuals here isn’t all HD or 3D, but is beyond decent anyway. The backdrop in this offering depicts tall rocky cliffs in the distance, with oddly crooked towers sticking out from in between them. The landscape in the foreground, though, is all green grass and some big trees. And the controls come in the shape of different magical artifacts, which is also pretty neat. These are candles, a magic wand, a bag of fairy dust and a crystal ball, as well as a mortar. Wild Wizards also boasts some cool animated sequences, which you will be sure to enjoy throughout gameplay. 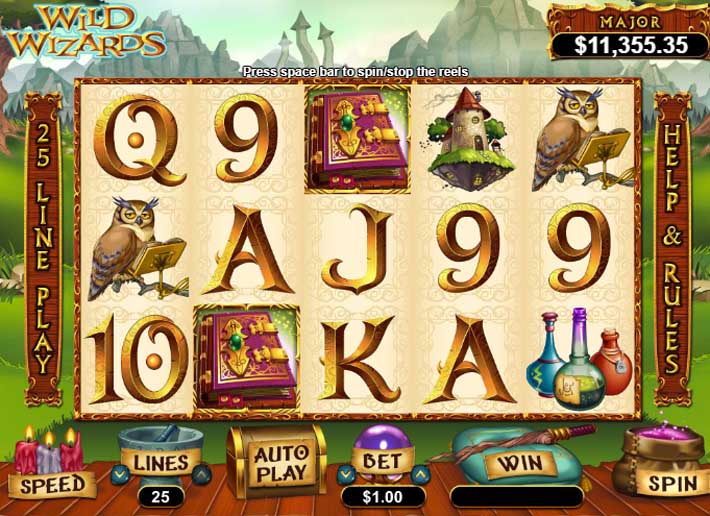 The symbols in this title include the lower value playing card icons. These appear in an antique font, appropriate for the theme. And they are all golden in color, so none of the typical bright colors and flamboyance. The symbols in question are A, K, Q, J, 10 and 9. But the more interesting symbols are of course the higher value thematic ones. First in line is a symbol picturing three different shaped bottles with questionable contents. Next is a leather pointed hat with a feather in it – like that of a witch or wizard. And after that there’s a little house on a piece of land that appears to be floating in midair. And last but not least, the highest value symbol on these reels is an owl reading a book. This leads us to the game’s layout, which features the customary 5 reels and 3 rows. The total number of available paylines is 25, but you can also adjust these if you wish. Likewise, this will affect the betting range accordingly. Stakes here start at a minimum of only 1c per single spin. And the maximum possible bet you can make on these reels is $6.25 per spin.

The grey haired Wizard symbol is the game’s Wild, and an expanding Wild at that. In other words, whenever it lands on the reels, it will expand to cover the whole reel it’s on. However, it won’t land just anywhere. The Wild can only appear on reels 2, 3, 4 and 5. And it doesn’t offer any payouts of its own either. More importantly, the Wizard Wild will be able to replace any of the other symbols on these reels. This means it can help complete winning combinations and, thus, boost your payouts. In addition, there are even no exceptions as to the symbols the Wild can substitute for, so it can even replace the Scatter.

The book of spells symbol represents the game’s Scatter. And unlike the Wild, it actually does offer payouts and can appear on any of the five reels. However, in order for you to enter the bonus rounds, you will need both the Wild and Scatters. You will need to land the Scatter on reel 1 and the Wild on reel 5 at the same time. This will trigger one of five different special features.

The first of them is the Mad Magic feature, which will award you a total of 5 freespins. During this round 4, 3 and 2 of a kind prizes will pay 5x, 50x and 500x respectively. You won’t be able to retrigger this feature, though. Another one is the Wizard’s Tower feature, which will give you 8 freespins in total. During this feature, you will benefit from a sticky Wild on the middle reel. Furthermore, you can also retrigger this round and gain another 8 freespins on top.

Then there’s also the Fireball feature, which can award you 6 freespins. Here you will get to benefit from not one, but 2 whole sticky Wilds on reels 2 and 4. And just like the previous one, you will be able to retrigger this feature, too. Next up is the Polymorph feature, where the Wizard will reveal to you 1, 2 or 3 Bonus symbols. Then during the subsequent 7 freespins, any Bonus symbol that appears will turn into a Wild. And last but not least, the Sorcery feature will award you 10 freespins with an extra Wild added to the reels before each spin.

Wild Wizards offers an abundance of special features for you to benefit from and enjoy. The visuals and game setup are all highly entertaining and can also be very rewarding. Just be sure to watch out for your bankroll in this slot. It can be a while before you land any substantial wins here, due to this game’s high variance.