Achilles is an online slot game by casino software developer RTG. As you will no doubt be able to tell from the graphics in this title, it’s slightly dated. That is not to say that they are of poor quality or anything like that. It’s just that they lack the flashiness and sophistication that modern day slots aim for, such as 3D and high definition visuals, along with animated sequences and such. There’s also no real soundtrack to accompany gameplay. Instead, there are some pretty generic sounds that will mark winning sequences and that’s about it. Now, as for the theme of this slot game, it centers on eponymous ancient Greek warrior. He was legendary and fought in the Trojan War, but was famous for having just a single weak spot – his heel. So, the backdrop and many of the symbols in Achilles refer to the Trojan War, including the walls of the city itself, which you can see just above the reels. 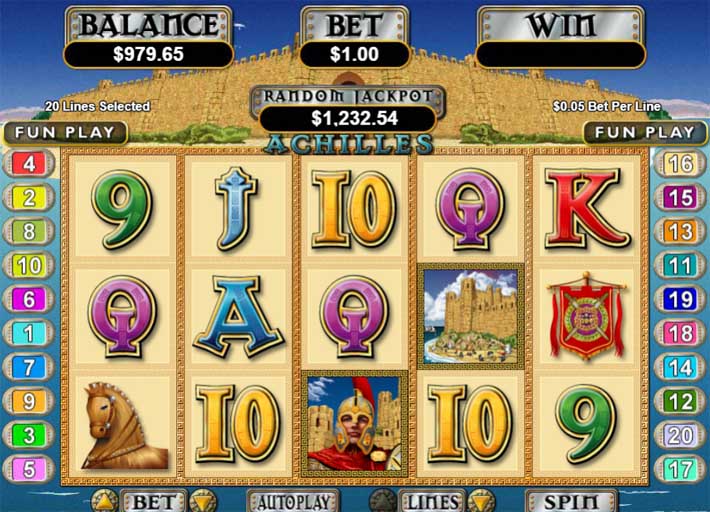 The symbols in this title start off with the lower value playing card icons, though. Some of them are designed to fit in with the theme, too, which is nice. And the symbols in question are A, K, Q, J, 10 and 9. Next up are the four higher value symbols that bear even more relevance to the theme. These include a round shield and a red and gold banner. Next is the famous Trojan horse – the wooden horse statue that essentially won the war. And last but not least is the beautiful Helen, who was allegedly the reason for the war to begin in the first place. As for the game’s layout, things are pretty standard here. It features a regular grid of 5 reels and 3 rows, with a total of 20 available paylines. You can also adjust the paylines, if you so choose. And this will, of course, reflect on the betting range. Stakes here can start as low as just 1c per single spin. And the maximum amount you can wager on these reels can be up to $100 per spin.

Achilles himself acts as the game’s Wild symbol, in addition to being its most lucrative icon as well. With its help you can potentially pocket up to a hefty 10,000 coins from just a single spin. The Wild can land in any position, anywhere on the five reels. More importantly, however, it will be able to replace any of the other symbols on these reels. And in doing so, the Wild can help boost your winnings by creating better winning combinations. However, it will not be able to substitute for the game’s Scatter symbol. 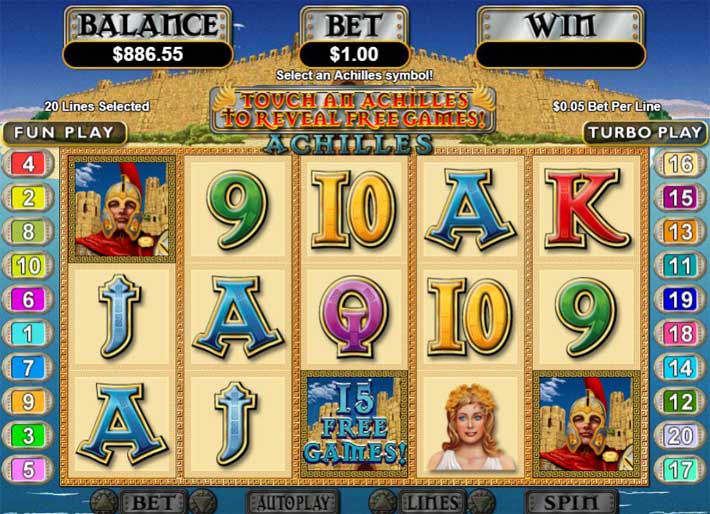 But on top of that, though, the Wild also comes with its very own feature. If you land 3 or more Wilds in any position on the reels during the same spin, this will trigger one of the two freespins rounds. Before the freespins begin, though, you will have a selection of 3 Achilles symbols to pick from. Your choice will reveal 15, 20 or 25 freespins for you to play. After this, the bonus round will begin and will also come with a 3x multiplier on all your winnings. And in addition to that, the Scatter will also turn into either Helen or Achilles during the freespins. Better yet, you can even retrigger this feature.

In turn, the Scatter depicts Troy and just like its Wild counterpart, it will be able to land in just about any position on the reels. It isn’t as lucrative as the Wild, though. In fact, its payouts are right between the lower and higher value icons. The Scatter, too, can trigger a freespins bonus round, one of its own. For this to happen, you will be looking to land at least 3 Scatters all at the same time on the screen. This will award you a total of 10 freespins. And with them you will also benefit from a 3x multiplier on all freespins winnings.

In addition, you can retrigger the feature and gain an extra 10 freespins on top. You can do this by landing three Achilles and/or Troy symbols all at the same time, which makes it even simpler.

Though it is a fairly simplistic title in terms of its presentation, the visuals and even the setup, Achilles is a very decent offering. It has not one, but two whole freespins bonuses for players, which is unusual. And both of them have retrigger options, whereas one of them even makes it even easier for players to take advantage of. We would put this title in the medium variance range. So, with this in mind, you should be able to enjoy the bonuses at fairly agreeable intervals. The base game will offer more frequent smaller wins, and the freespins will be able to reward you with bigger prizes.