Wish upon a Jackpot

Wish upon a Jackpot Slot Review

Wish upon a Jackpot is probably the most fairytale-like slot game you’re likely to come across. Brought to us by software developer Blueprint Gaming, this game is a fusion of all your favorite bedtime stories. Everything from the incredibly detailed and lush background to the fantastic graphics on the reels is littered with fairytale elements that you are sure to recognize. Let’s first look at the background, though, as there’s a lot going on here. There are trees on each side of the reels, each with a charming little lantern hanging off its branches. And just in the back of the reels, between the trees, is the beautiful, golden sunset. A handful of magical sparkles line the sky, but take note of the bottom of the screen, as well. Notice the pumpkin on the one hand and the bright red apple on the other? Do you recall what stories they belong to? And how about the reels themselves, how many fairytales will you recognize there? Aside from the regular lower value playing card symbols A, K, Q, J an 10, there are a few more magical icons. Such is the enchanted kingdom, Cinderella’s glass slipper, a golden harp, the game title and the Frog Prince. 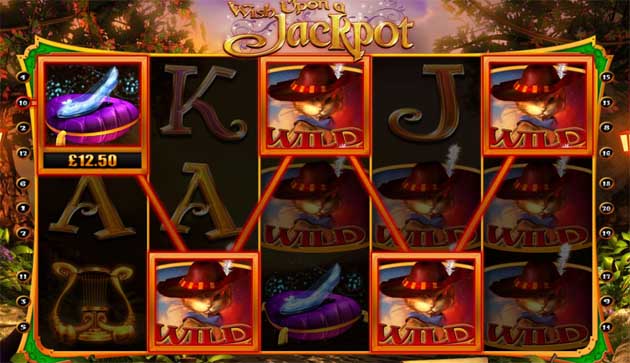 As for the layout, it’s fairly customary with 5 reels and 3 rows. There are 20 paylines in this game, and players can enjoy a betting range from 20p up to £50 per spin. The RTP, however, is estimated to be a bit on the lower side at around 94-95%.

This game is a whole bunch of fun, not only because of the theme itself, but mainly because of the awesome bonus features. But let’s take it one step at a time and start with the Wild symbol. It’s the Frog Prince, which is the highest paying symbol on these reels and can also substitute for any of the regular symbols to contribute to winning sequences. It will only not replace the Scatter symbol. But the best part of this game is the Fairy Godmother Spin feature. It doesn’t require you to land any bonus or Scatter symbols. Instead, this is a random feature that can occur during any of the spins. 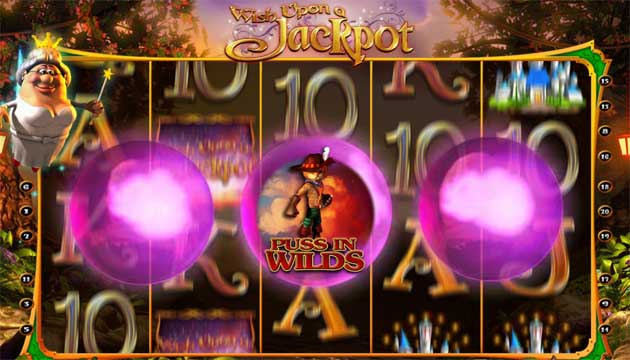 It has a variety of treats in store for you and when active will require you to pick one of three pink orbs. The orb you choose will reveal one of 5 different bonus games that also have to do with famous stories!

What’s more, you will even have the option of picking out the bonus of your choice from the selection of fairytale books. 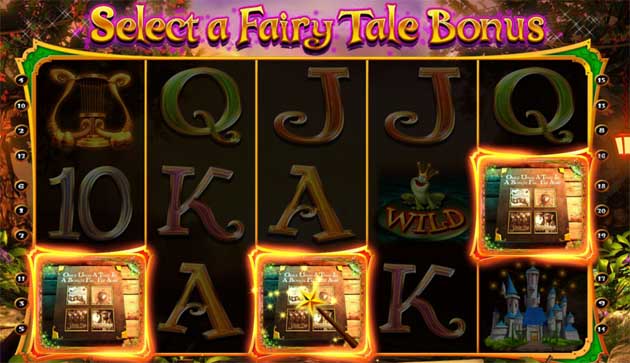 Wish upon a Jackpot is truly a great slot, with plenty of excitement and winning opportunities. It’s not every day that you come across a game that offers such a variety of special features. Furthermore, you can actually trigger them fairly often, which will essentially give you a great possibility to experience the slot to its fullest and make the best of all the freebies. This slot machine is a favorite amongst many slot players and we fully understand why. The only thing we have against this slot machine is that the RTP is a bit low for a full score.